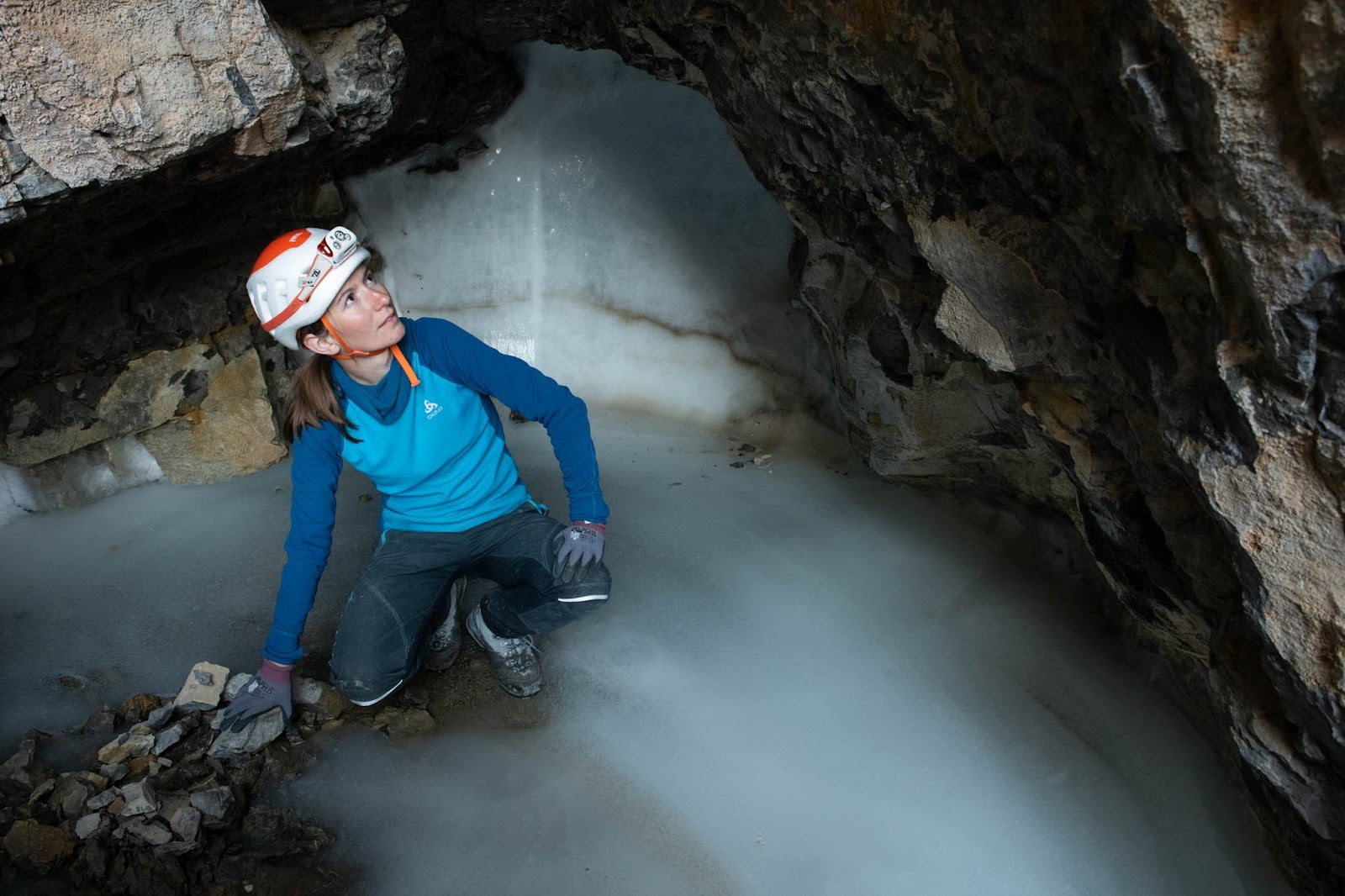 Of Caves and Climate Changes

Gina Moseley is exploring the world’s most northern caves in Greenland looking for clues the past might hold for a warmer and wetter future in the arctic.

On the first evening of APRI’s 2022 annual general meeting in Innsbruck, APRI member Prof. Gina Moseley gave a thrilling presentation of her expeditions and discoveries in the remotest and wildest corners of Greenland. Read a summary of seven years of cave expeditions and paleoclimate research in Northeast Greenland.

As water turns to rock

Moseley uses mineral deposits called speleothems which are found in caves, like stalagmites and stalactites, as a geological climate archive. As water drips steadily from the cave ceiling, it carries with it the constituents of the carbonate minerals from which the cave minerals are made – year by year and layer by layer. One could say, cave minerals are precipitation that has turned into rock.

After many years of researching speleothems from around the world, Gina Moseley eventually turned her attention northward. As many great adventures, the Greenland Caves Project started in a pub. A colleague and caving friend pointed her towards a short paragraph in a 1960’s military expedition report, that mentioned cave mineral deposits in a cave somewhere near Centrum Sø, Northeast Greenland. After years of chasing funders, Prof. Moseley eventually found herself one day in 2015 onboard a small propeller plane heading to cross the Greenland sea. 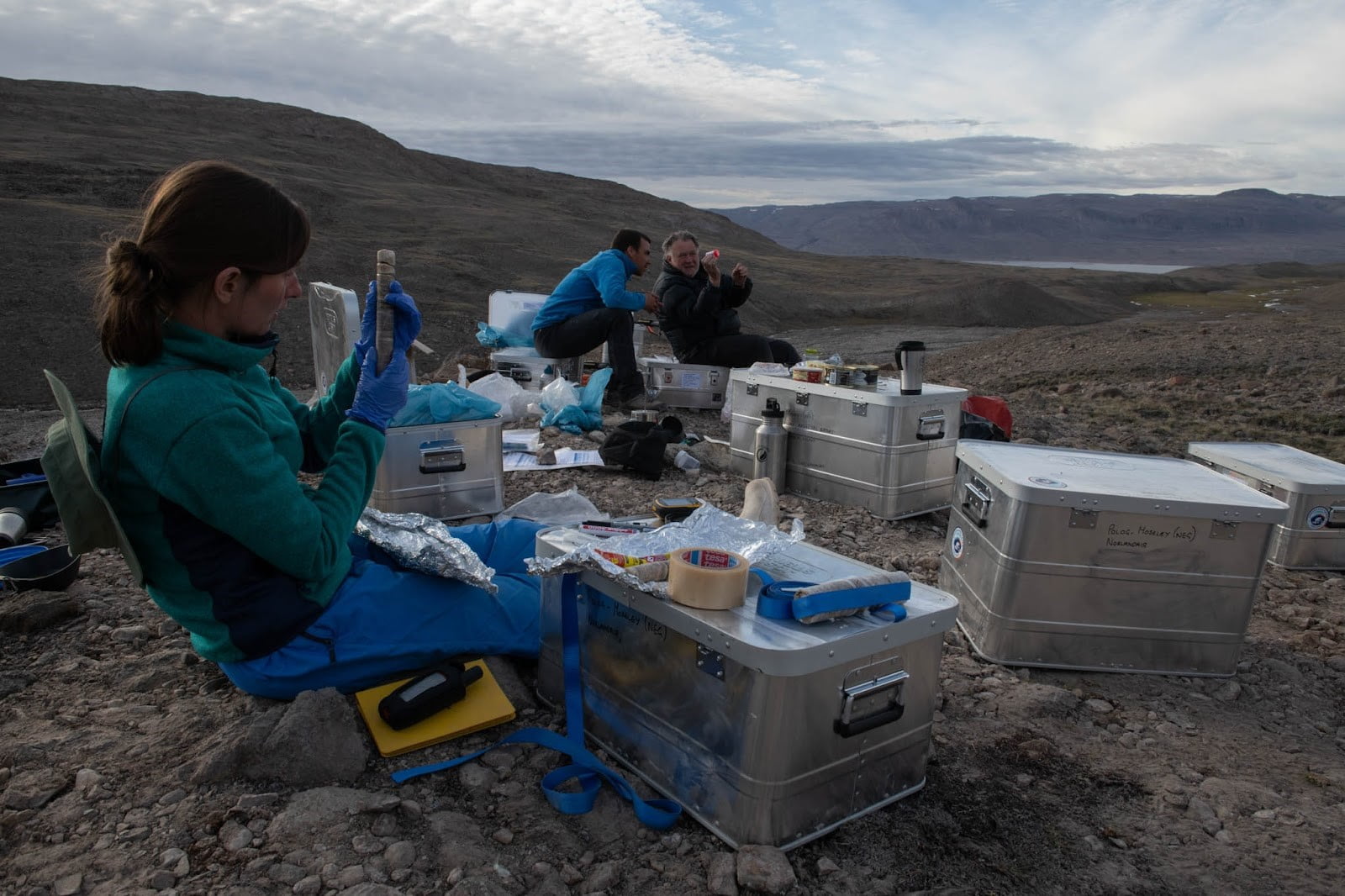 Prof. Moseley and her colleagues investigate some of the many cave mineral samples they recovered (© Robbie Shone)

Most people associate Northeast Greenland primarily with snow and glaciers. In fact, however, large areas are ice-free due to extremely low precipitation. Instead, visitors find a polar desert of limestone, almost devoid of any vegetation. The geology of the region dates back to the early Paleozoic era almost 400 million years ago, long before the ice came and when Greenland was still connected to parts of Europe and North America. At that time, a shallow ocean covered the area. The rocks are full of fossils of the creatures that inhabited the seabed at that time.

Only many millions of years later did the earth’s crust rise. The mountains of Greenland were formed and with them came the precipitation that slowly ate into the rock, forming the caves that gave Grottedalen – the valley of caves – its name. Moseley now uses these caves for her research.

The 2015 expedition was a success. Despite extremely challenging logistics (exploring was done on foot without helicopter support), the small team Moseley had assembled managed to explore many previously unknown caves and also re-visit the sites described in the 1960’s report that prompted the whole project. Moseley was able to collect valuable cave mineral samples – the first of their kind in all of Greenland.

“Most of the samples we collected formed during an unusually warm time in earth’s climate history around 400,000 years ago.”

This success story paved the way for two more expeditions in 2018 and 2019. This time, backed by substantially more funding, it was possible to explore beyond the range of the 2015 expedition far into the canyons of Grottedalen. A larger, interdisciplinary team, as well as more sophisticated sampling equipment allowed Moseley to precisely map numerous unexplored caves and retrieve drill cores from cave mineral sequences. 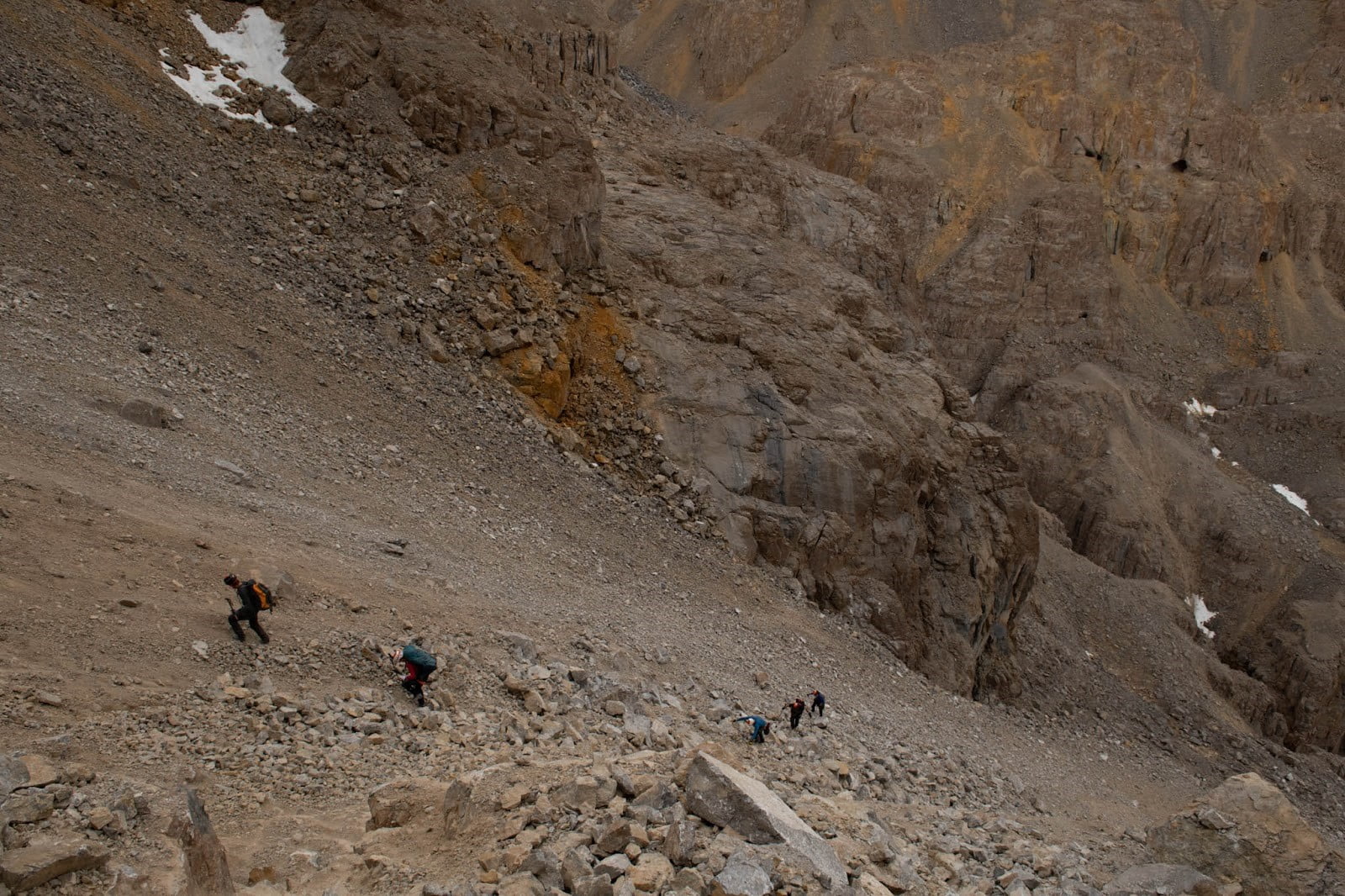 3D animation of one of the discovered caves. For more animations see here. (© Greenland Caves Project)

A warmer and wetter place

In the lab, scientists can not only precisely tell when cave minerals have formed, but also what the environment was like back then. Notably, it’s very strange that cave minerals even exist in Greenland in the first place. Today, Grottedal is a polar desert with the ground frozen permanently and caves completely filled with ice. The lack of liquid water makes it impossible for cave minerals to form under such climate conditions.

Moseley explains that most of the samples she collected formed during an unusually warm time in earth’s climate history around 400,000 years ago. Scientists refer to this period as marine isotope stage 11 – a so-called super-warm-period. However, not a lot is known about this time in Greenland. The ice core record, which is so important for our understanding of arctic climate change, ends at a mere 130,000 years. As of now, Prof. Moseley’s speleothem samples are one of the very few windows into the deep time of Greenland’s climate history. 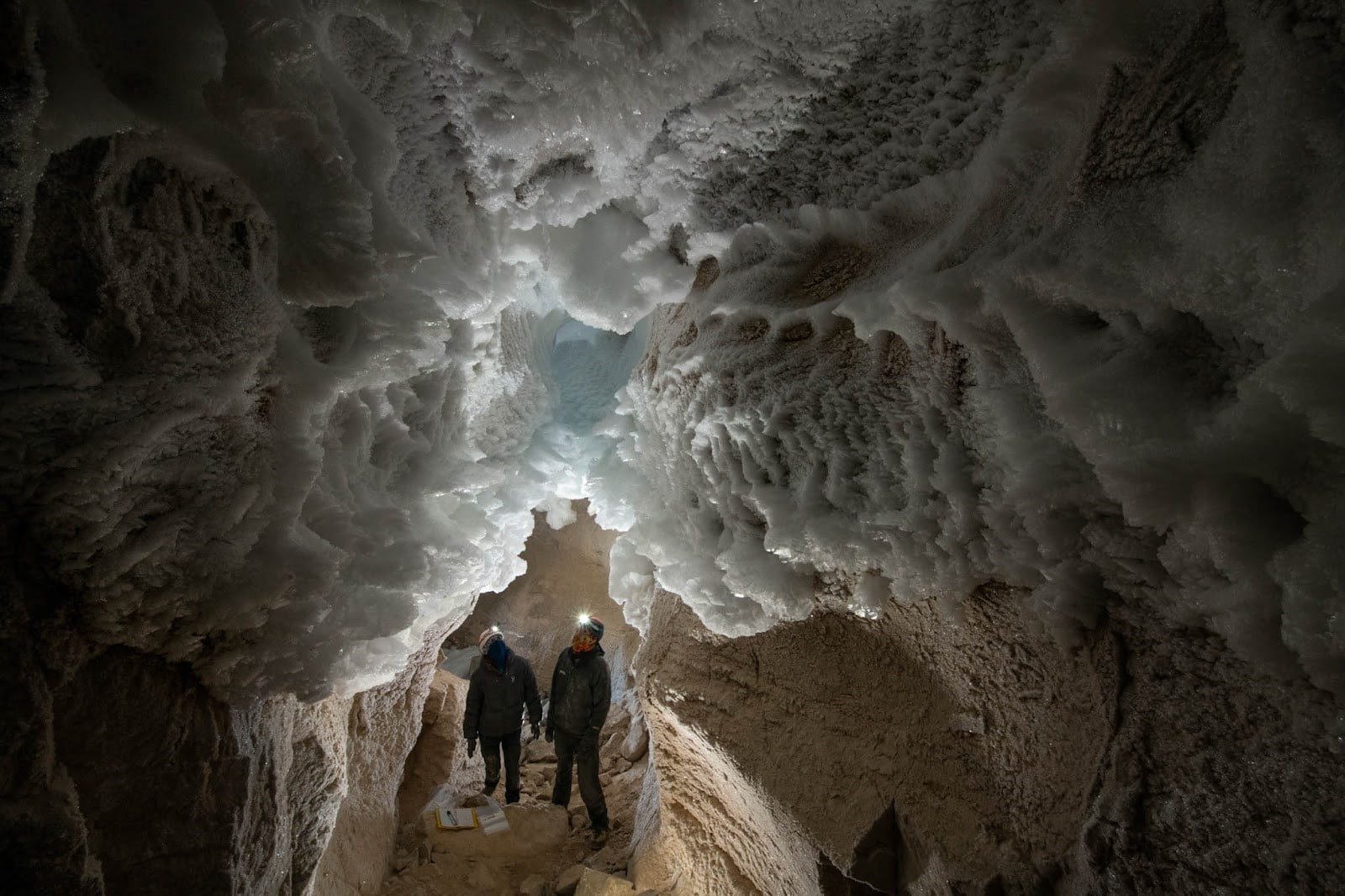 A cave filled with the most fragile ice formations. In the past, the caves most likely were much warmer than today (© Robbie Shone)

Prof. Moseley was recently awarded the 2021 Rolex Award for Enterprise and will once again lead a caving expedition in the summer of 2023. This time she will lead her team to the very north of Greenland where she hopes to find more mineral samples in caves that are even more remote and have not been visited by any human up to now.