Methane gas emissons in the ice of Siberian Arctic lakes

“Lakes and wetlands in the permafrost of the Arctic region play an essential role in the carbon cycle”, explains Georg Pointner, a researcher at b.geos – an Austrian SME – and a doctoral student at the DK GIScience doctoral program of the Department of Geoinformatics at the University of Salzburg. “In particular, greenhouse gases such as methane, which are increasingly escaping due to thawing of the permafrost, are essential for recording and modeling what is happening”, adds Annett Bartsch, managing director of b.geos. Both are members of the Austrian Polar Research Institute APRI. Data show that the global concentration of methane in the atmosphere rose significantly until 1998, then stagnated for several years before rising rapidly again. The reason for this is unclear so far.

Yamal’s tundra is dominated by permafrost.


Methane as a degradation product of microorganisms

Methane is produced by microorganisms during the decomposition of organic substances such as plant and animal remains. In the permafrost in the Arctic regions, this organic material has literally been frozen for thousands of years. The current increased thawing of the permafrost now allows microorganisms to become active and to decompose the organic substances by releasing methane, but also carbon dioxide and other volatile substances. Furthermore, methane already formed in other geological eras, which is stored under and within the permafrost layer, can escape throughout the year. The outgassing of methane is therefore an important indicator for the thawing of the permafrost. Especially in the studied region of Yamal, a peninsula in Western Siberia, the increasingly extreme gas emissions can cause serious problems for the local population. The Yamal Nenets who populate Yamal are nomadic reindeer herders who particularly use the period of frozen watercourses and lakes for transport and travel. Due to the large gas emissions from the lake sediments and thawing permafrost, large areas of thinner ice layers or holes in the ice are increasingly found, making it difficult to walk and travel safely across the lakes. The dangers even extend to gas explosions that can leave large craters.

Map of Siberia and the location of the investigated lake on Yamal. (© b.geos)

The Arctic north of Russia is a difficult-to-access, infinitely large area, which is why alternative methods for measuring methane gas emissions close to the ground are needed in order to be able to make appropriate hazard assessments and modelling. Together with colleagues from Russia and France, Georg Pointner and Annett Bartsch have used geospatial analyses and innovative combinations of satellite data sources to gain, document and analyze new insights into the phenomenon of methane outgassing from lakes in winter.

Basically, there are two main types of methane outgassings through lake sediments: superficial methane seeps and so-called subcap methane seeps. “The former are caused by methane that is continuously formed and released in the upper layers of the sediments without storage over geological time” explains Georg Pointner. “Subcap seeps, in contrast, are strong emissions from geological reservoirs located deeper in or below the permafrost, which were previously prevented from escaping by the cryosphere cap. Possible origins of subcap methane are microbial, thermogenic or mixed microbial-thermogenic processes within sedimentary basins, including conventional natural gas reservoirs, coal seams, buried organic material associated with glacial sequences and possibly methane hydrates. Methane flow rates from subcap seeps are significantly higher than those from surface sources, and the areas of open holes in lake ice are much larger (up to 300 m²) for subcap seeps. Researchers have now identified over 150,000 holes in lake ice in Alaska and Greenland, which they associated with subcap methane seeps in regions of strong permafrost thaw or severe glacier retreat. Methane emissions from Arctic lake sediments play a significant role here, but their contribution to atmospheric concentrations is not yet fully understood.

Researchers have now identified over 150,000 holes in the ice of lakes in Alaska and Greenland, which they associated with subcap methane seeps in regions of heavy permafrost thaw or severe glacier retreat.

The new investigations and observations presented in the publication used data from space-based synthetic aperture radar (SAR) – a special radar system to enable large-scale investigations. SAR proved to be very useful in detecting anomalies in the lake ice and the overlying snow cover. In SAR images, floating lake ice usually shows high back-scatter because there is a strong reflection of the radar signal from the rough ice-water interface of floating lake ice. The reason is the difference in the dielectric constant between ice and liquid water. The researchers used data from the two European satellites Sentinel-1A and Sentinel-1B, which are equipped with an identical SAR sensor. This identified regions of anomalously low back-scatter in the SAR images of the floating lake ice of Lake Neyto in central Yamal as zones of potential subcap methane gas emissions from the lake sediments. “In the study” – says Georg Pointner “we evaluate the nature of SAR back-scatter anomalies measured by Sentinel-1 together with very high resolution (VHR) optical WorldView-2 images. Thus, we present methods for the automatic identification of holes in the lake ice from the VHR data and investigate their spatial relationships to the anomalies in the SAR images.” 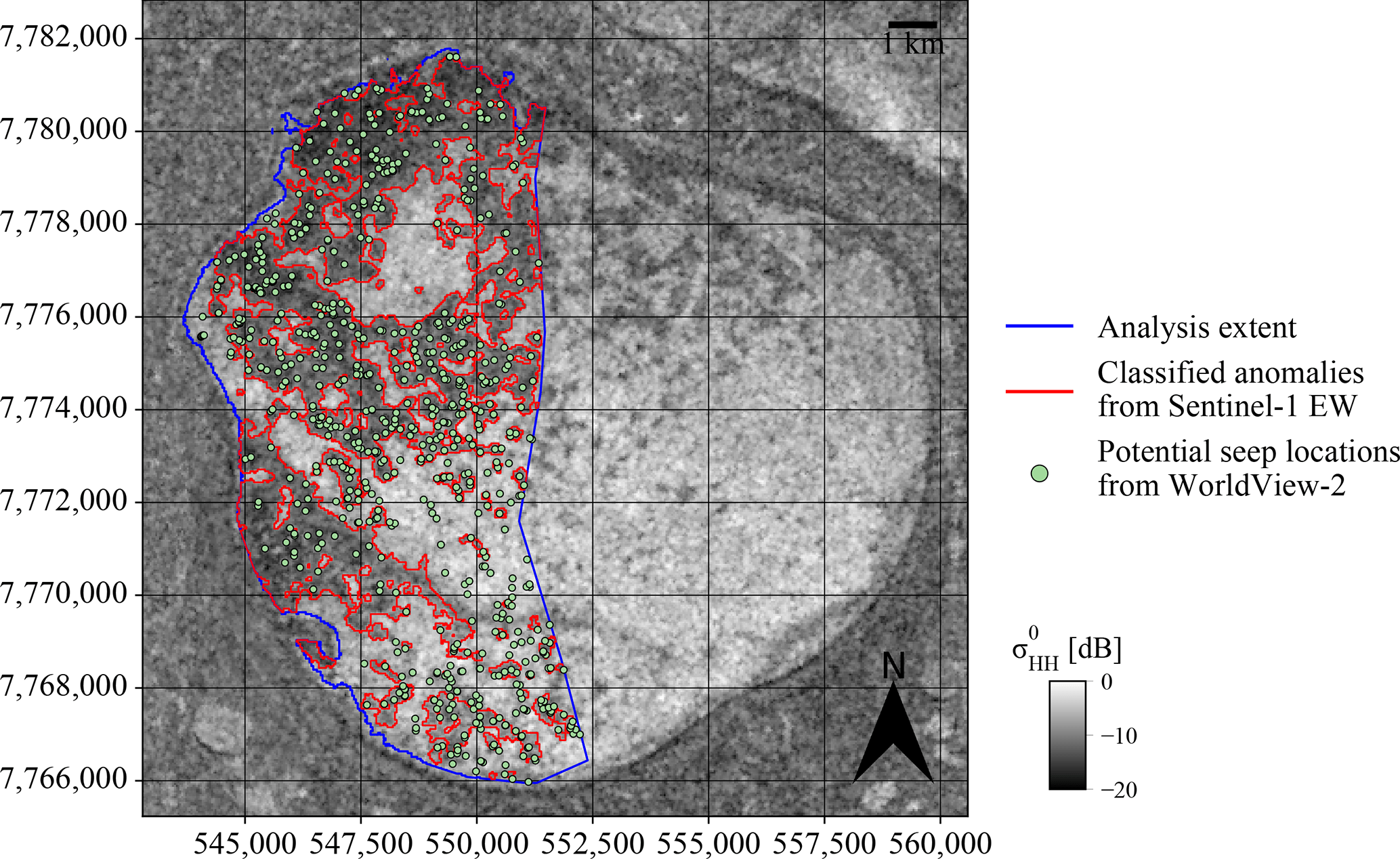 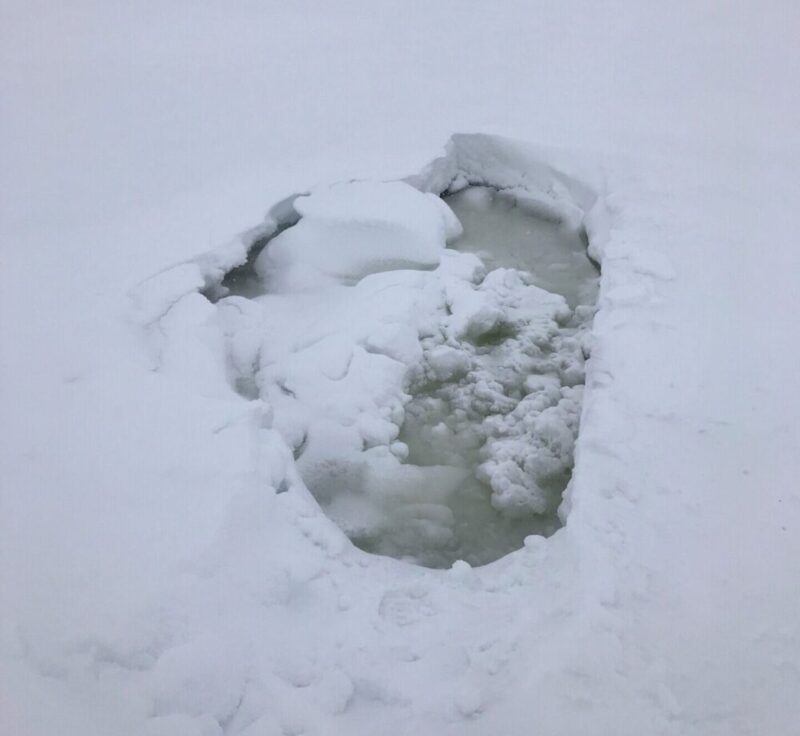 Synthetic Aperture Radar (SAR) belongs to the class of imaging radars and is used as a sensor for remote sensing. It provides a high-resolution, two-dimensional representation of a section of terrain by scanning the earth’s surface using electromagnetic waves.

Pointner goes on to say that the results generated show that the majority of mapped holes (71%) in the VHR data clearly correlate with anomalies in SAR images taken a few days earlier. Also surprising is the fact that similarities with SAR images taken more than a month earlier are also clearly evident. This supports the hypothesis that the observed anomalies are related to gas emissions. Furthermore, a significant expansion of the back-scatter anomaly regions in spring is evident in all analyzed years from 2015 to 2019. While the holes in the ice are predominantly only a few square meters in size, the anomalies can cover half the lake area (about 100 km²) during their maximum expansion shortly before the onset of snow melt. The authors suspect that the back-scatter anomalies are caused by the sinking of the lake ice and the resulting flooding of the ice sheet through the holes. This leads to a soaking of the snow around the holes and reduces the radar back-scatter. This is consistent with data from other satellite observations. The finding of the comprehensive work is that SAR data could be of paramount importance in locating further seeps in Arctic lakes and possibly helpful in quantifying their contribution to the methane content of the atmosphere.

Written by the APRI-Media Team.
Contact: use our contact form.
Photos, if not differently stated: © A. Bartsch 2015.
Timelapse animations from “Pointner, G., Bartsch, A., Dvornikov, Y. A., and Kouraev, A. V.: Mapping potential signs of gas emissions in ice of Lake Neyto, Yamal, Russia, using synthetic aperture radar and multispectral remote sensing data, The Cryosphere, 15, 1907–1929, 2021“