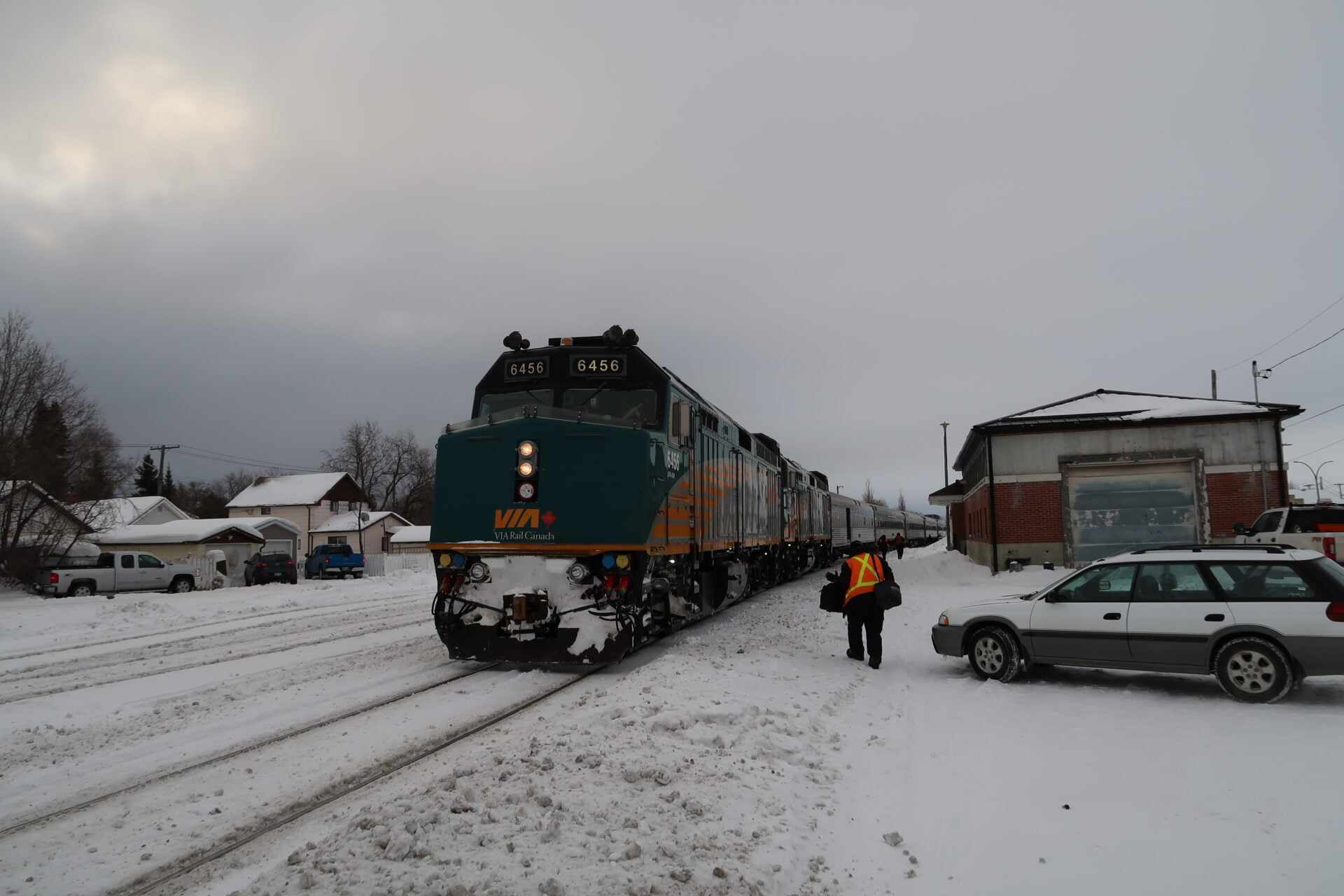 As Austrian Polar Research Institute Media Officer, I had the pleasure to talk to Philipp Budka from the Department of Social and Cultural Anthropology at the University of Vienna about his InfraNorth project responsibility.

Mag. Dr. Philipp Budka is a post-doctoral researcher and lecturer who completed his Ph.D. at the University of Vienna with a dissertation on socio-technical change in remote First Nation communities in Canada. Among other things, his research revealed that digital infrastructures contribute to the creation and maintenance of social relationships as well as cultural empowerment.

InfraNorth, with its full name “Building Arctic Futures: Transport Infrastructures and Sustainable Northern Communities”, is a European research project funded by the European Research Council and initiated and led by Univ.-Prof. Dr. Peter Schweitzer, Deputy Head of the Department of Social and Cultural Anthropology at the University of Vienna and Board Member at the Austrian Polar Research Institute. The overarching research question – What role do transportation infrastructures play for Arctic communities? – is challenging, as the Arctic attracts global attention for a variety of reasons: geopolitics, (re)militarization, resource extraction, tourism, and environmental protection in the face of rapid climate change are drivers for a better understanding of the “new Arctic.” Many of these activities require the construction or upgrading of transportation infrastructure in this relatively remote, inaccessible, and sparsely populated part of the world. These large-scale infrastructures, while mostly externally funded, can have profound impacts on local residents. Therefore, the project encompasses the entire Arctic region from Europe to North America to Russia, although in the case of the latter, there is much uncertainty about potential involvement due to the current global political situation.

Logo of the InfraNorth project (©InfraNorth).

APRI: What are the project’s research questions and what is your research focus?

Philipp: The project addresses different aspects of the impact of transport infrastructure on the local population. My focus is to understand whether existing and planned transportation infrastructures support permanent and sustainable living in Arctic communities, or whether they reinforce the trend of replacing permanent residents with “temporaries” such as shift workers, tourists, and military personnel.

APRI: What research methods are used to investigate this?

Philipp: The project team consists of cultural and social anthropologists and geographers. We use ethnographic fieldwork and quantitative surveys to generate data that will then help identify and compare patterns not only at the local but also at the regional level. From this, we infer the material and non-material interconnections of residents and transportation infrastructures in the three Arctic regions of Europe, North America, and Russia.

APRI: What are the research goals?

Philipp: Our overall research question about the role of transportation infrastructure in Arctic communities is of urgent importance on both theoretical and practical levels to gather input and develop decision options. We hope to use the results to contribute to critical conversations about the future of the Arctic. Prior to InfraNorth, I researched on the development and use of digital infrastructure in remote Canadian communities. As leader of the North American research region I will contribute these experiences to the InfraNorth project. My research area is in Churchill at the Hudson Bay in the Canadian province of Manitoba.

APRI: How and where exactly does your fieldwork take place?

Philipp: Churchill is the only place in the North American Arctic with a deepwater port that is connected to a railway network. This transportation infrastructure has enabled the export of grain from the major Canadian growing regions since 1929. Before the construction of the railroad, there was a trading post that served, among others, the Hudson Bay Company to trade with the local population. The construction of the Hudson Bay Railway (HBRY) was instrumental in the growth of the town. Not accessible by roads, Churchill had several thousand residents around the middle of the 20th century – mostly military personnel at Fort Churchill around the airport. Today, the village has just under 900 permanent residents.

The HBRY begins at The Pas and stretches 1,300 km across subarctic forest and tundra country to Churchill. There were many technical hurdles to overcome in constructing the route – the large temperature differences between summers with up to 30°C in the southern part and -50°C in the northern part in winter, wild rivers, and permafrost soils. Since Hudson Bay is only ice-free for about 3 months a year, ships and subsequently diesel-powered freight trains transporting grain to the port also operate only in this narrow time window.

Locomotive of the Via Rail train to Churchill, Manitoba, in The Pas 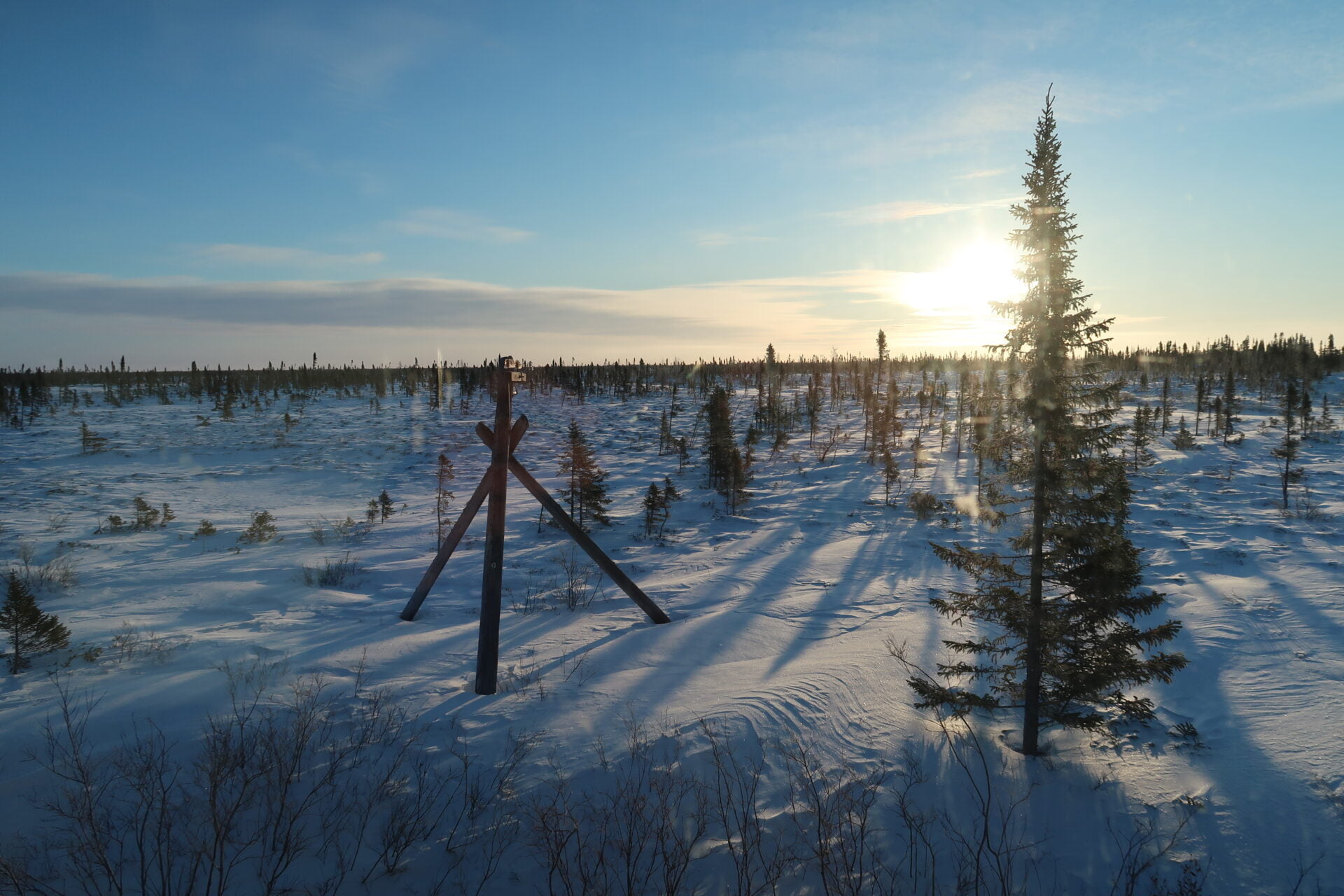 Boreal forest from the train to Churchill, Manitoba 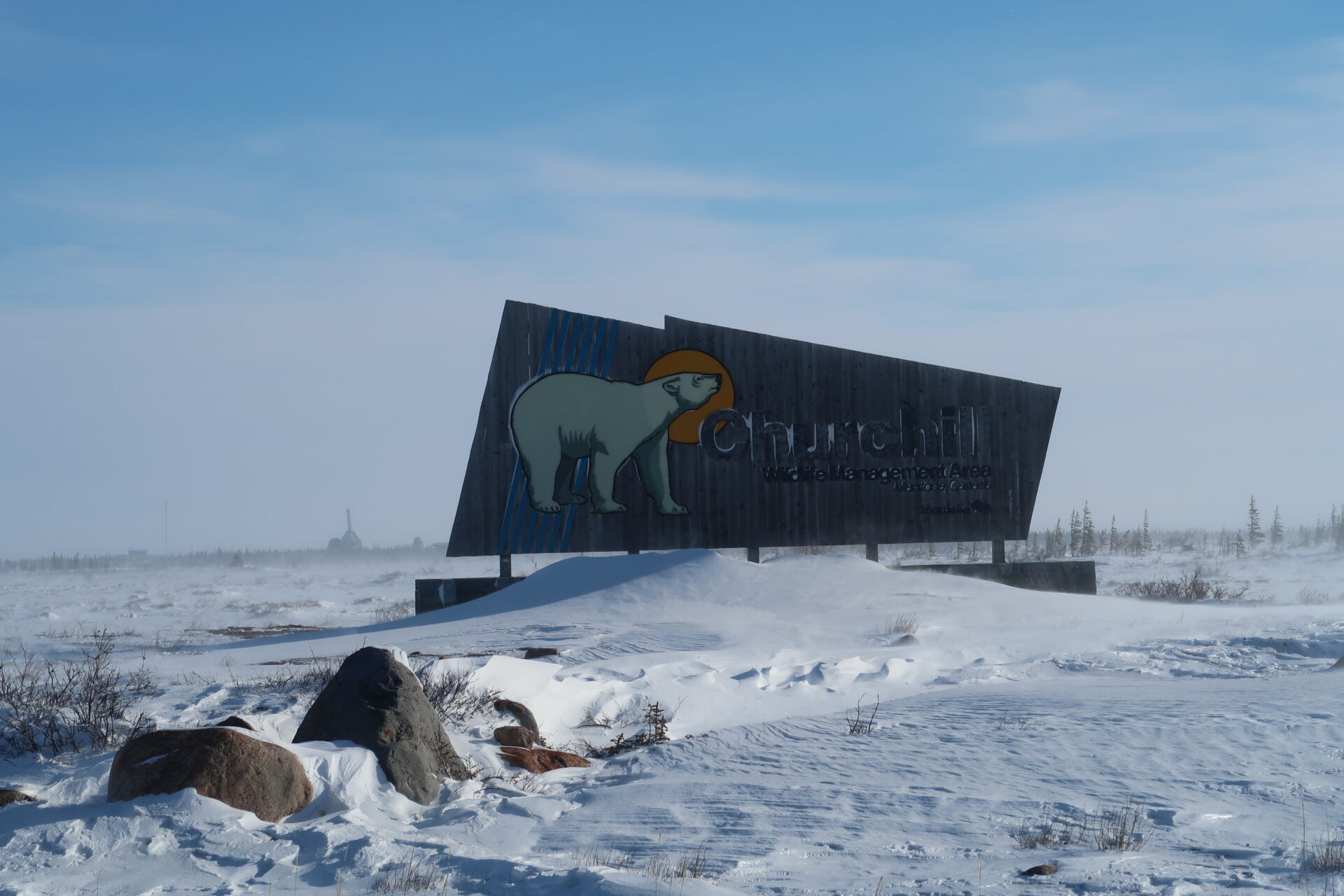 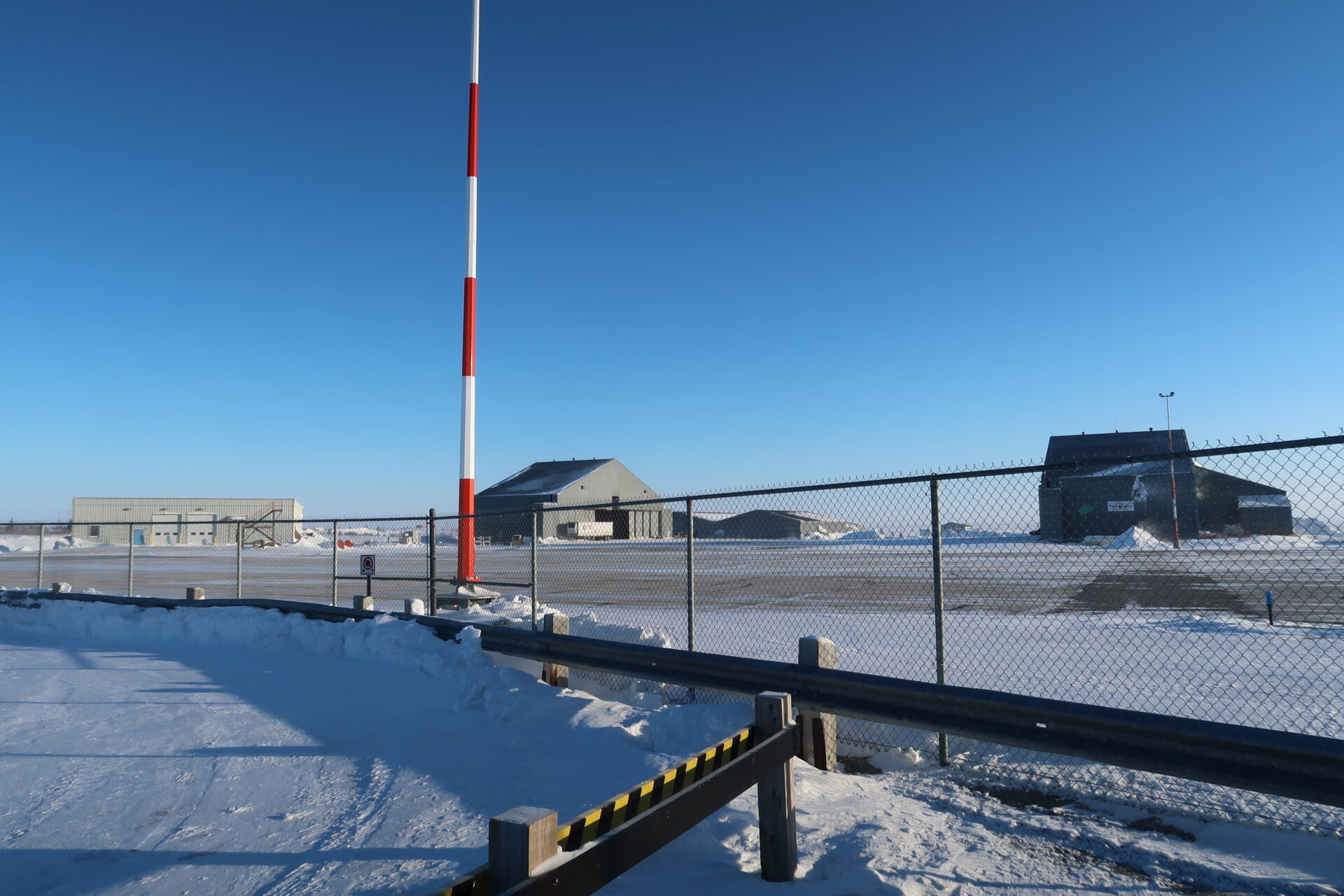 Philipp: Due to Covid, I could start my field research in Churchill only in February 2022, one year after the start of the project. Before that I could use the time to research about the transportation situation in the region. What surprised me was that the length of the shipping season is determined by shipping cargo insurers in London, based on risk assessments for shipping routes in the Hudson Bay, which are due to the climate only open for a short time during summer. I was fortunate to speak with the CEO of the company that owns the HBRY and the port in Churchill since 2018. Because of increasingly milder winters and shorter ice cover on Hudson Bay, he is seeking to extend the shipping season to gain an economic advantage.

In 2017, a catastrophic flood washed out the HBRY rail tracks so that is had to be closed for 18 months. This had a devastating impact on Churchill and its residents, as the HBRY is the only way to provide the community with cost-effective supplies, such as food, fuel and other daily necessities. Transporting these goods by air is, of course, much more expensive.

In about a year, the effects of the port and rail renewal currently underway will be seen.

APRI: Are other goods also transported?

Philipp: The interlocking railroad – port was designed primarily for the transport of grain.  However, goods for daily use also arrive in Churchill, mainly by train. The HBRY line can only be traveled relatively slowly at about 50 km/h because the trains are heavy and the track systems must not be overstressed. Ores are transported only on minor branch lines from mining areas in the north to industries in the south for processing. Passenger transportation is equally important, as it is much cheaper by train than by air and because Churchill has no road access. Since the 1980s, tourists have also increasingly come to Churchill, some by train, but many by air. 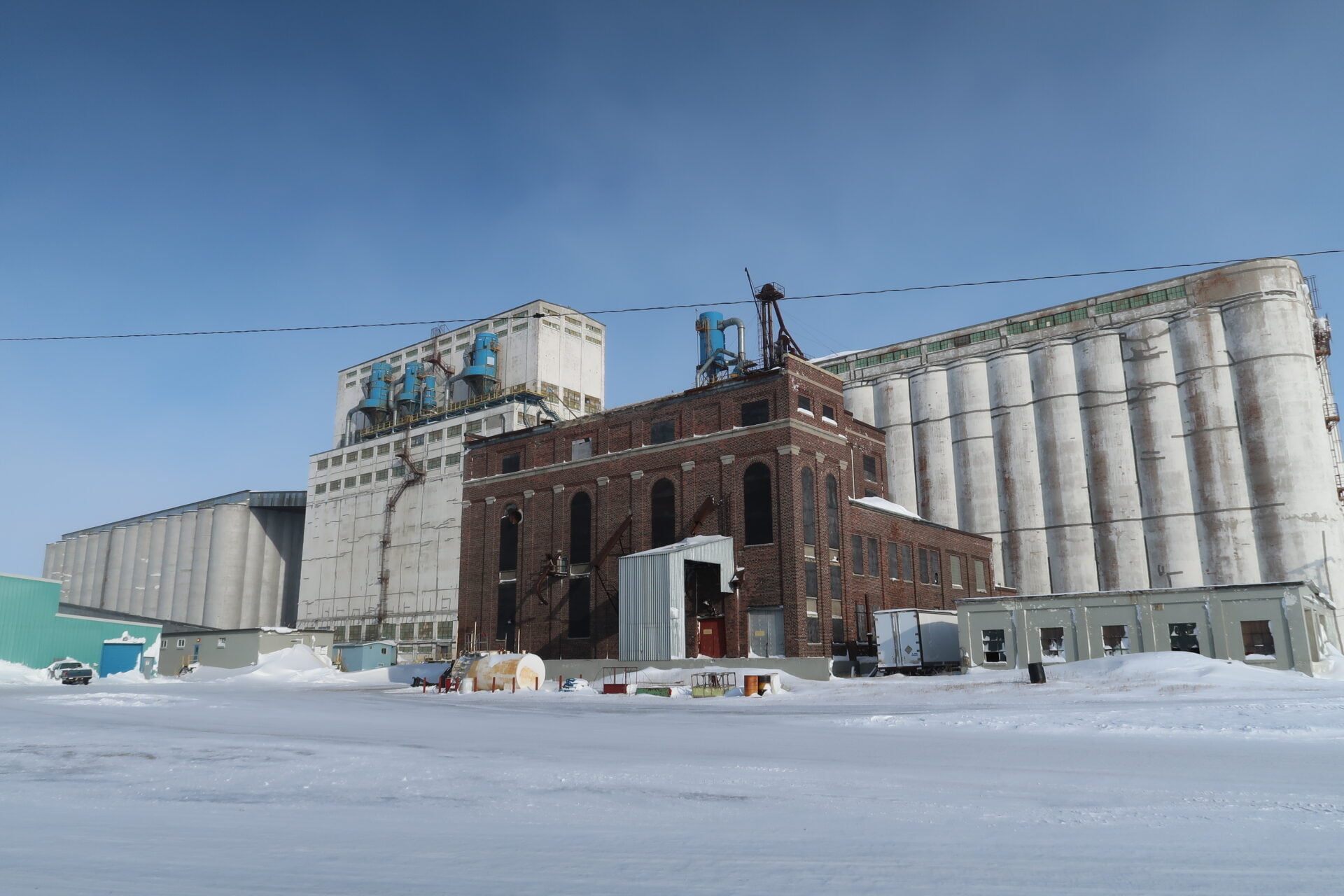 Warehouse at the port of Churchill, Manitoba 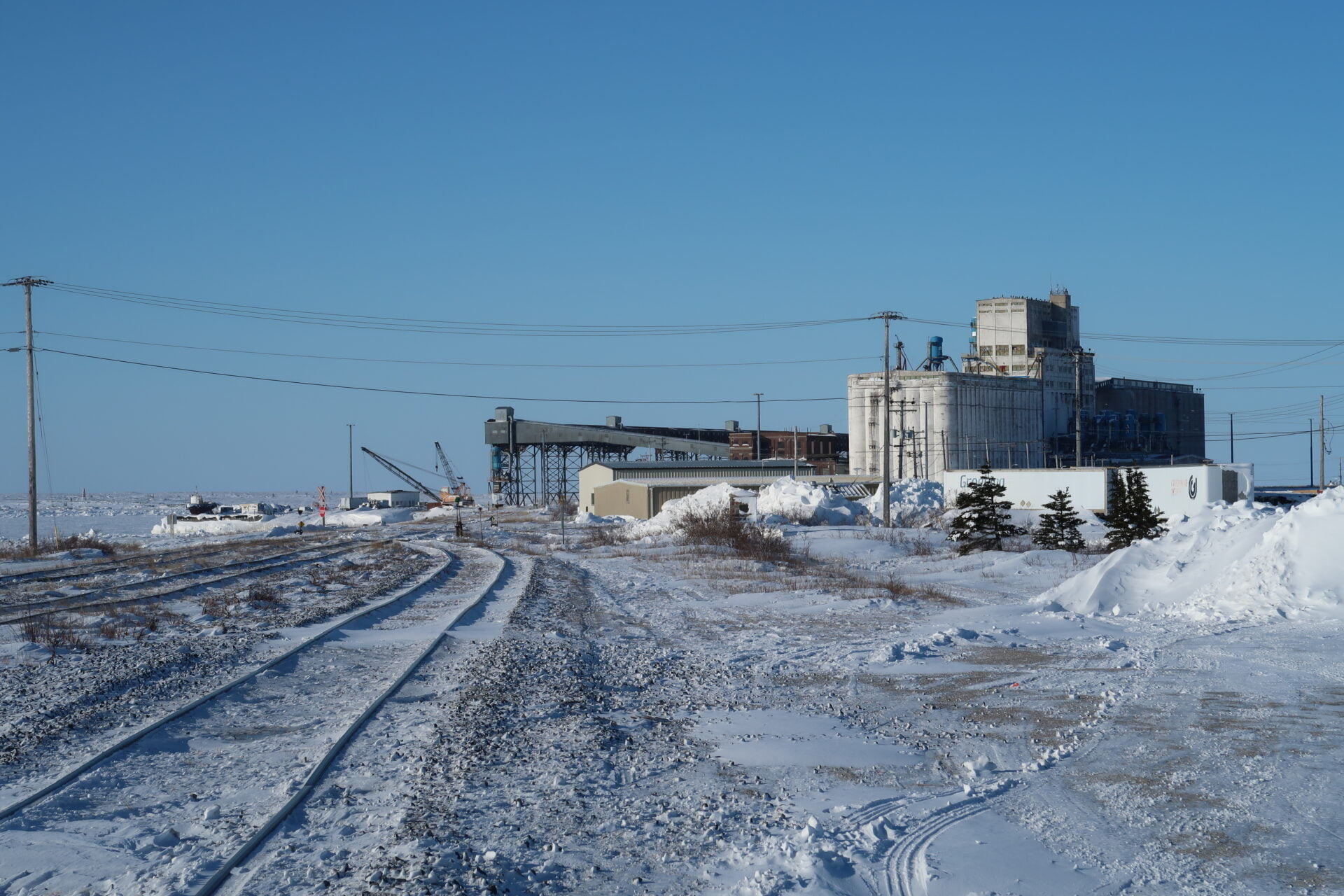 Tracks from the train station to the port of Churchill, Manitoba 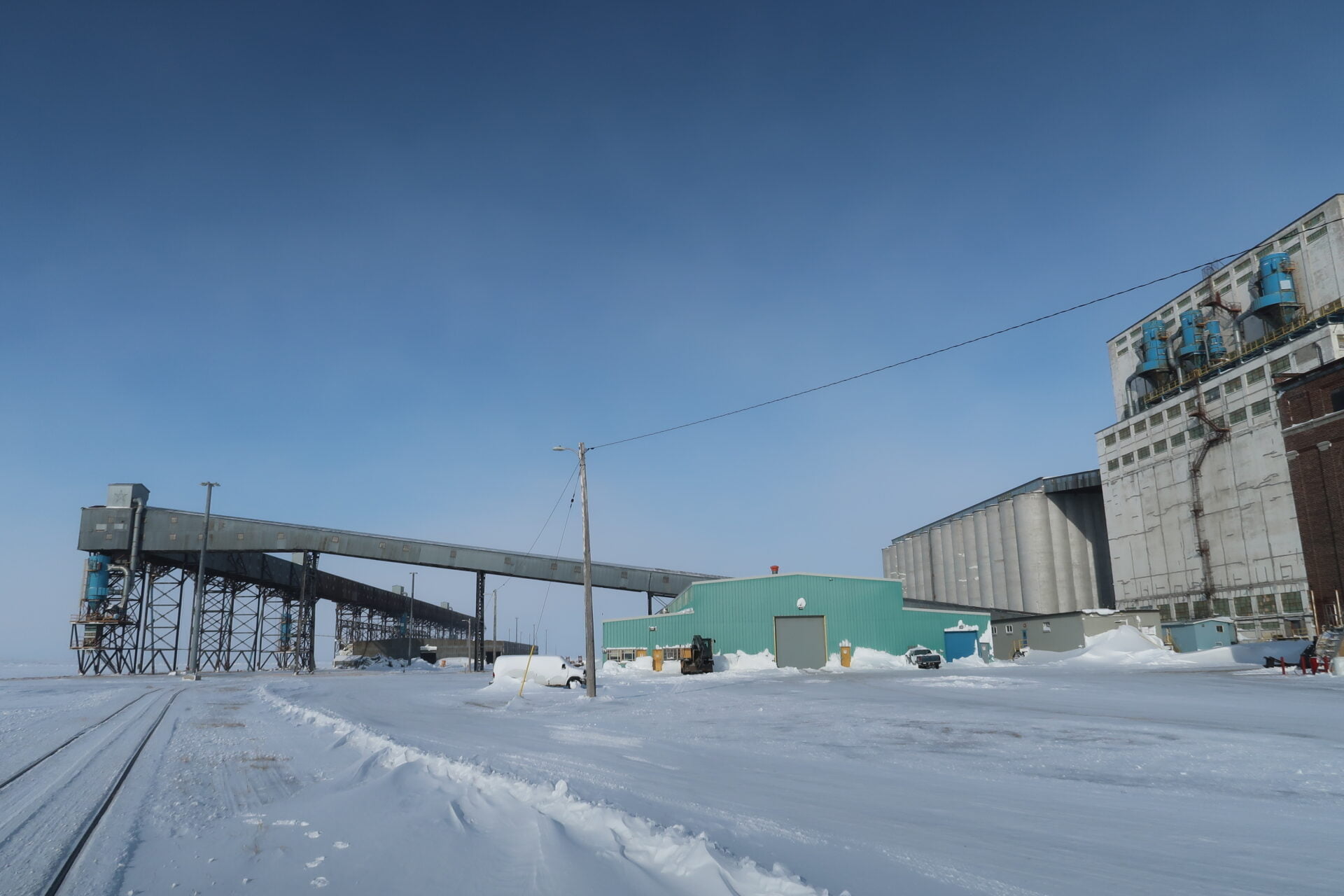 Cargo system at the port of Churchill, Manitoba 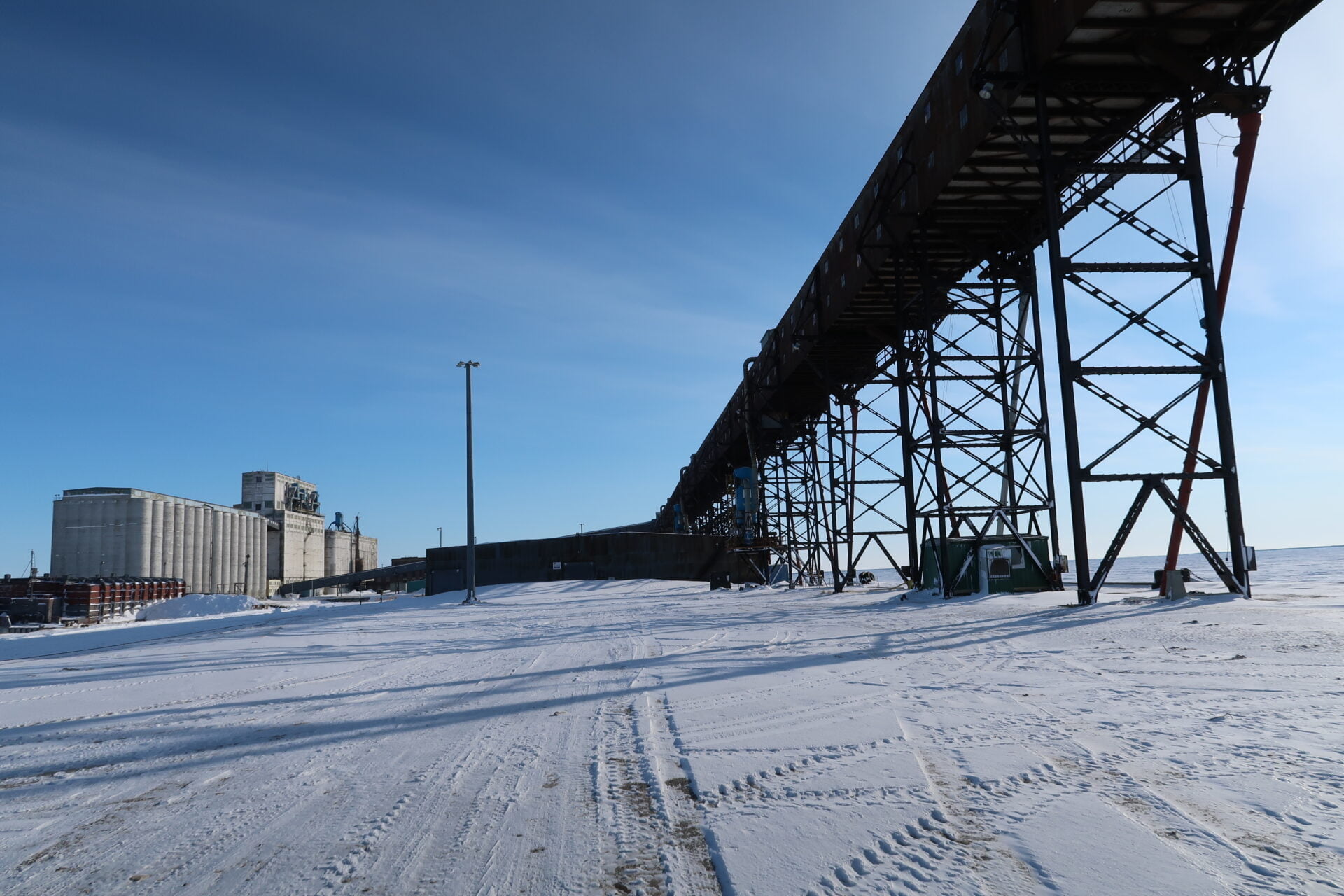 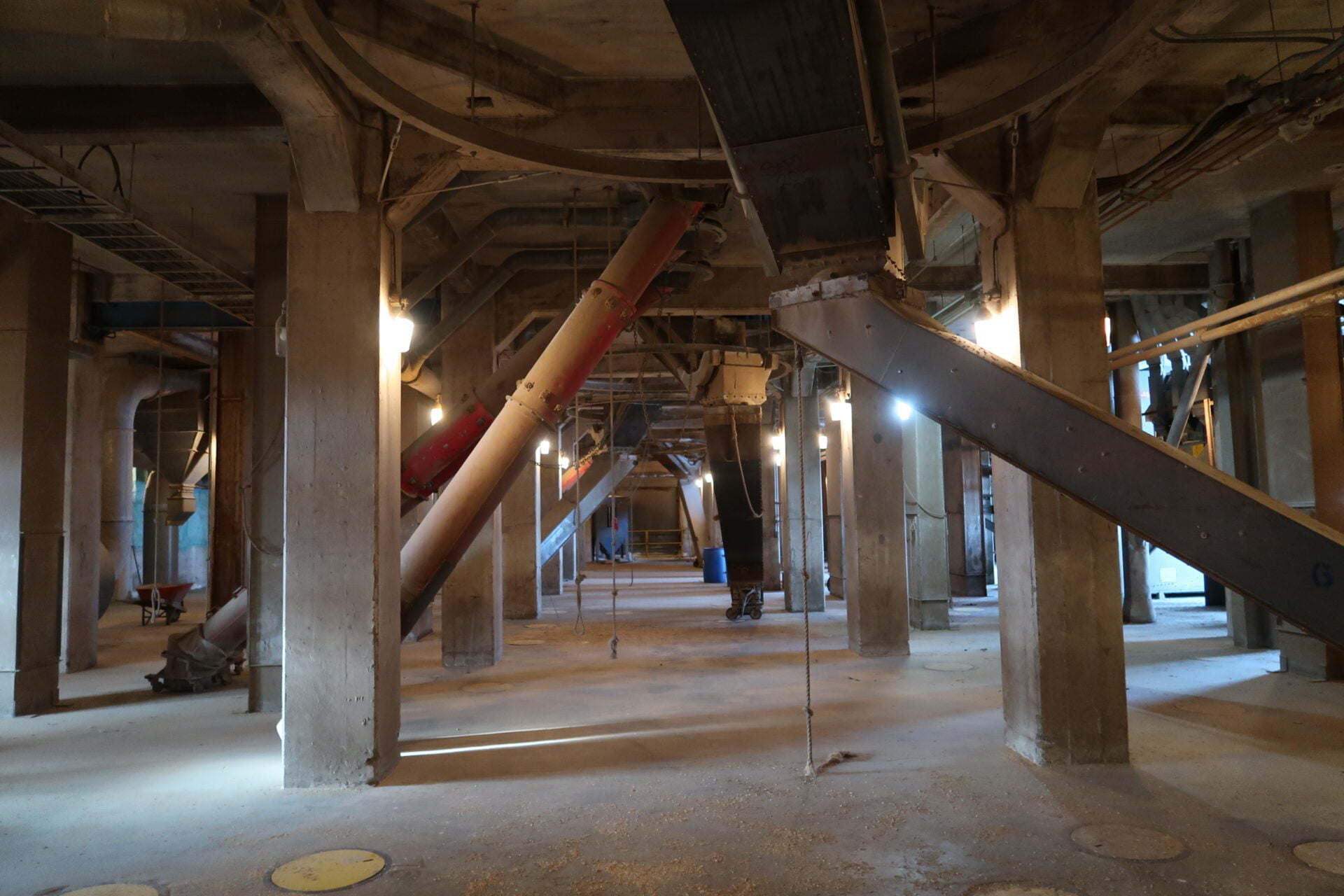 APRI: Is there anything about Churchill that particularly fascinates you?

Philipp: Yes, it amazed me that the transportation infrastructures there seem so oversized, relative to the size of the place. The grain elevators at the harbor seem close when seen from the town, but, located between the Churchill River and Hudson Bay, they are farther away. I soon gave up walking there at -50°C and used a ride. The airport is due to the original military use and although it was downsized after the withdrawal of the military still very large dimensioned so that it was even included in the list of alternate landing sites for the space shuttle.

APRI: What about ecotourism, which has made Churchill the “polar bear capital” of the world?

Philipp: This has experienced an enormous upswing, also because of climate change. The polar bear can be seen and experienced close to Churchill, especially in September and October, when up to 1,500 animals wait for the Hudson Bay to freeze over. It is the symbol of climate change par excellence. That’s why since the 1980s more and more – mainly wealthy – tourists are attracted to Churchill.

The observation and photographing of the recently born polar bear cubs at the end of February and beginning of March, when they leave the natal dens with their mother for the first time, is well paid for by tour operators with up to 14,000 CAD for an all inclusive travel package for just a few days.

Tourism is thus a major seasonal employer, especially in the “bear season”. That’s when charter flights boom and the frequency of passenger trains increases.


APRI: Is the route passable all year round?

Philipp: Yes, the HBRY route runs year-round from The Pas to Churchill via 48 stops, where parcels and letters are also loaded. Whether that is profitable, I can’t say. Due to COVID and the use of ice roads in wintertime there were only 5 people on the train. Teams with cars on railroad wheels regularly drive the track, check the conditions of the tracks and repair them if necessary. In winter, special snow-clearing units are used to remove large snowdrifts when the train’s locomotive can no longer push them away. 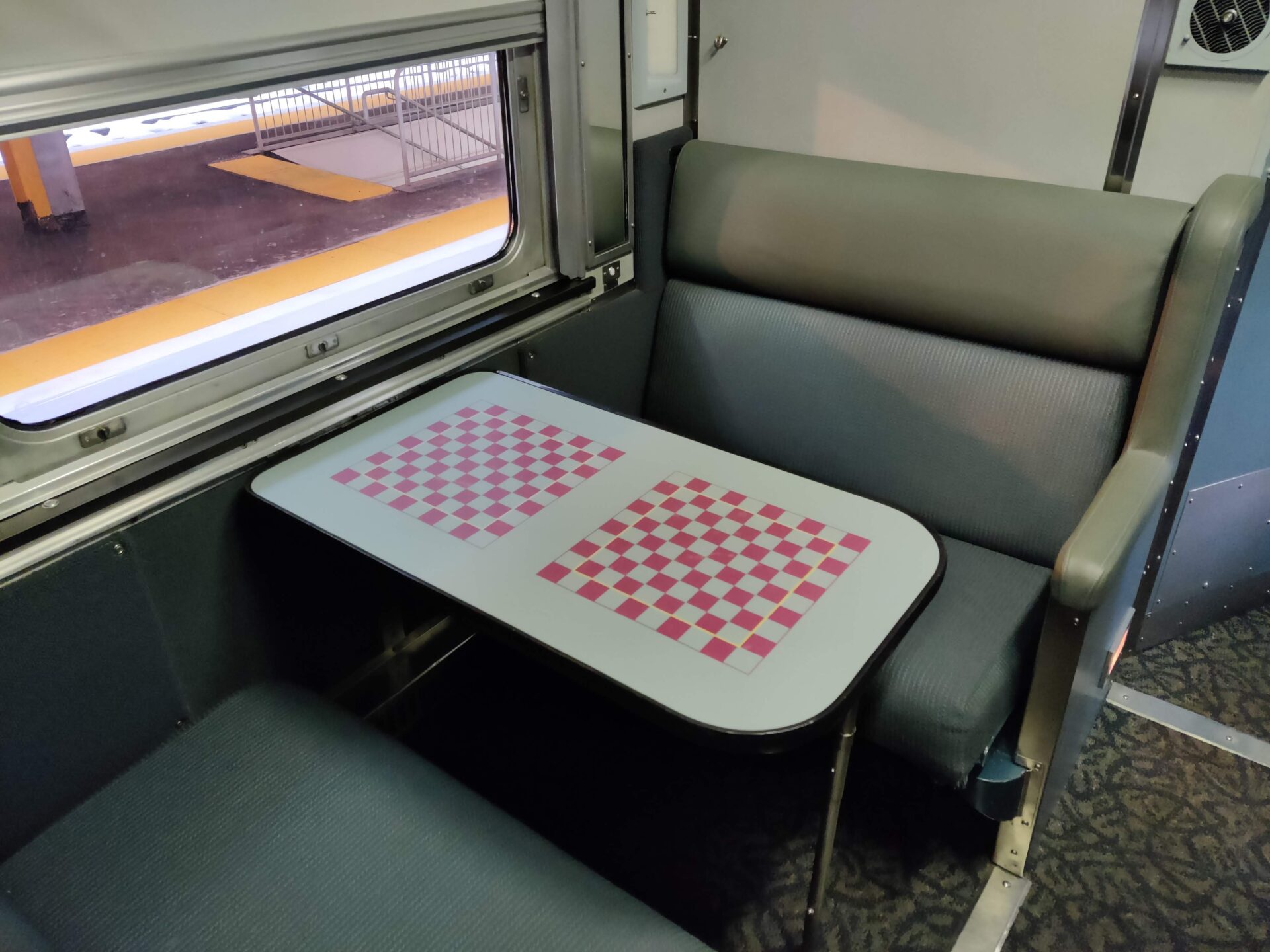 Seats in the Via Rail sleeping car to Churchill, Manitoba 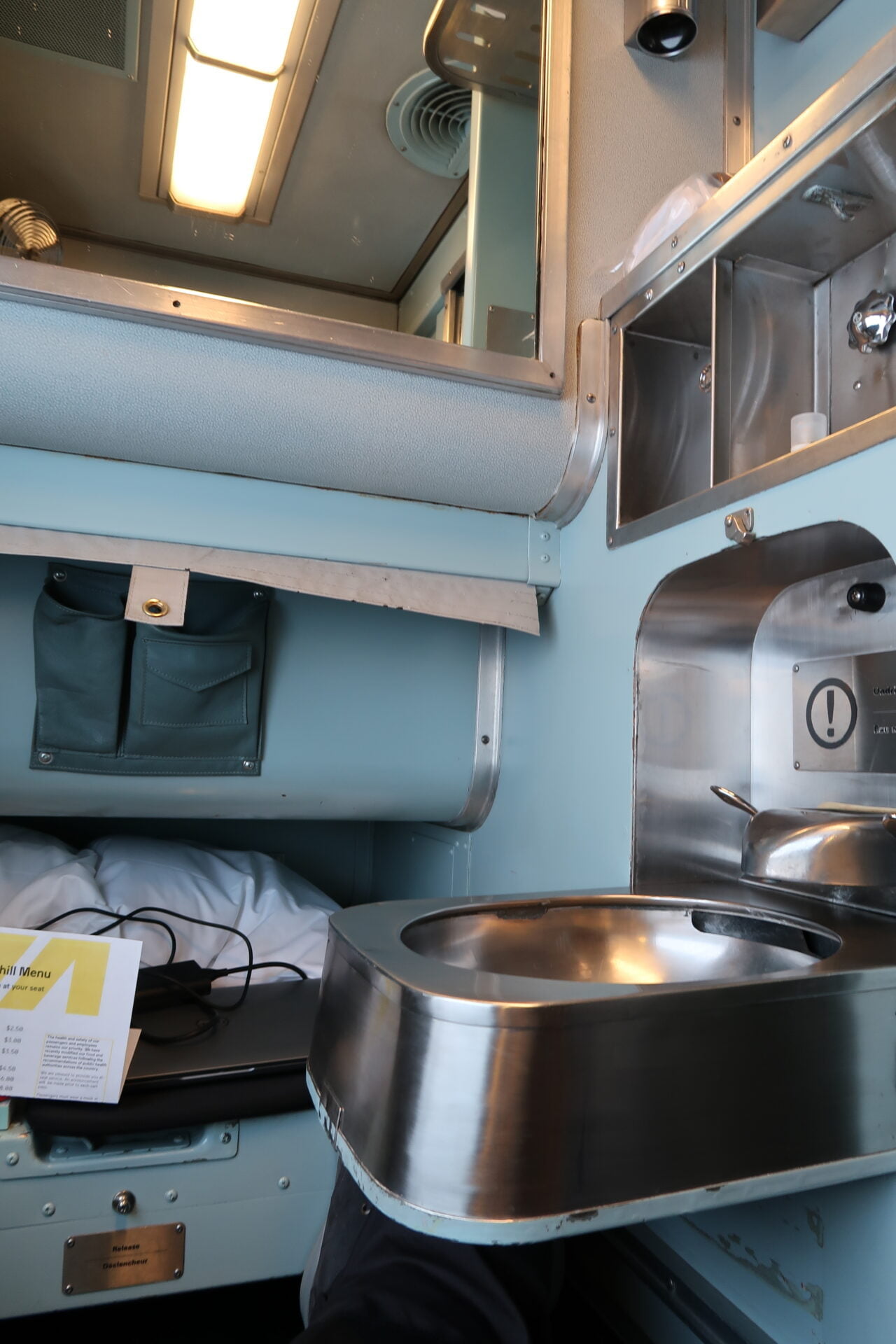 APRI: Who are the employers in the city?

Philipp: It is quite astonishing that the port with its large buildings on the huge area is only the second-largest employer for about 70 people. And that only seasonally. The largest employer is the health sector, the “Health Centre”, and that all year round. In addition, there is tourism and a wide variety of suppliers who seasonally need, for example, many tour guides, restaurant staff, etc. The considerable seasonal fluctuations affect the number of residents. I have spoken to residents who say that the place cannot be allowed to shrink any further. There is even a program to find and motivate new residents to move to Churchill.

APRI: Is there interest from residents in the InfraNorth research?

Philipp: The interest is definitely there. Some residents were happy to talk about something else than climate change and polar bears. It is important to me to be cautious and first build trust before using questionnaires or recording interviews. So I was still a bit more cautious with these methods. I lived in the household of a family that had a lot of experience with the local transportation infrastructure. The many informal conversations we had were particularly valuable. We talked about a wide range of problems and opportunities. In addition to participant observation and qualitative interviews, InfraNorth also uses a standardized questionnaire, which will soon be available online.

Boreal forest along the HBRY to Churchill, Manitoba


APRI: My last question is about if you have already first results or predictions?

Philipp: A lot of this is still very speculative, but it is becoming clear to me that climate change is experienced and evaluated differently by Arctic residents than by the non-Arctic population. The effects are not always a disadvantage for local communities; for example, a longer ice-free and thus navigable Hudson Bay means more jobs in Churchill. Geopolitically, the war in Ukraine could lead to a re-militarization of Arctic regions. I noticed military transports at the airport toward the end of my fieldwork, which were not there a few weeks earlier. How tourism will develop in Churchill is difficult to assess at the moment. However, local life and transportation infrastructures are closely intertwined with this industry and are likely to remain so.

APRI: Thank you very much, Philipp, for the interesting interview! We wish you and the whole project much success and hope to be able to report news soon.

Philipp Budka, PostDoc at the Department of Social and Cultural Anthropology, University of Vienna.
Read about the 50-hours train ride to Churchill on his blog post.