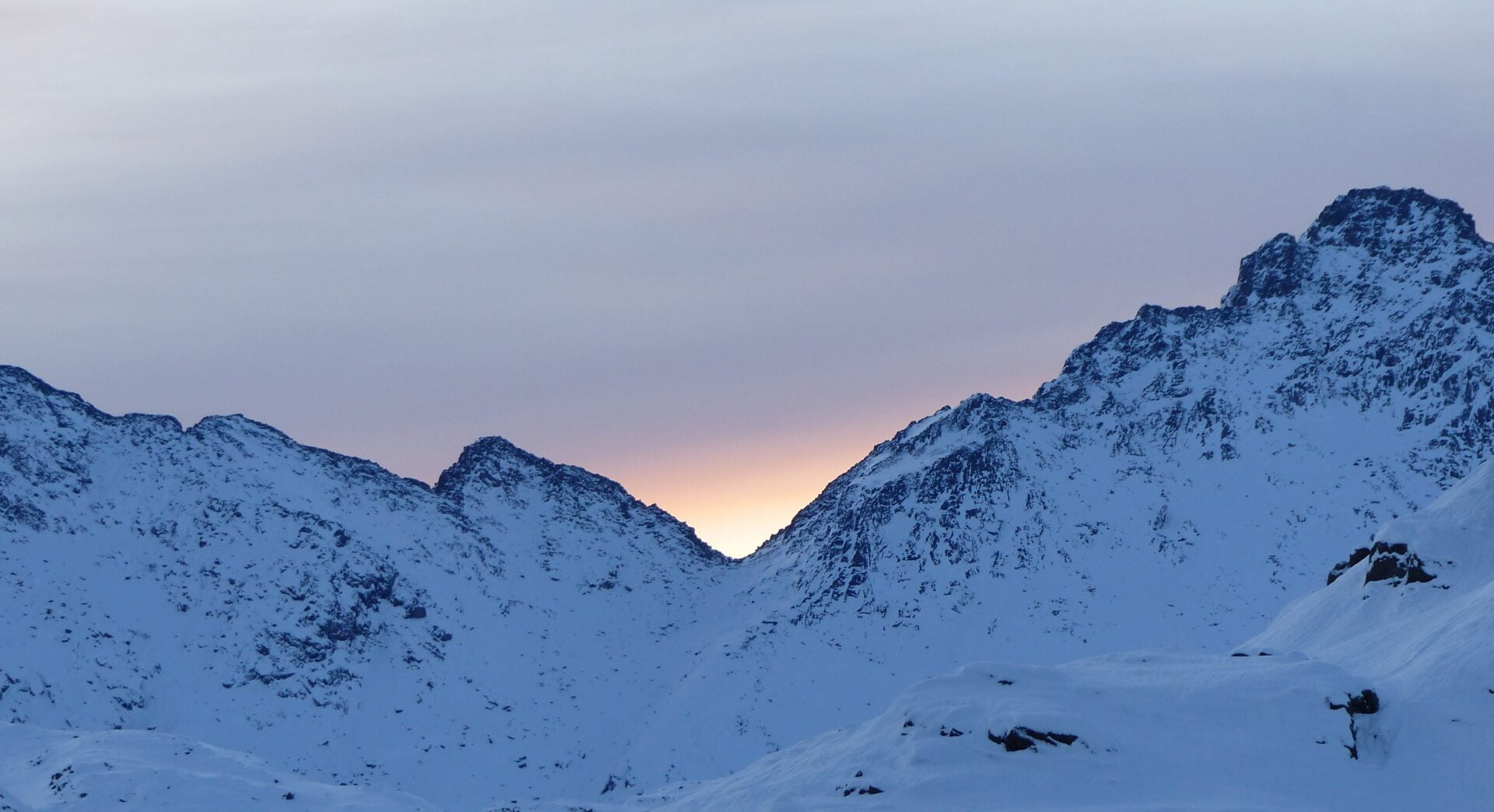 Immersing into the snow

Now it is my time to report on our walk into the snow. Well, I knew I would be landing in Tasiilaq when winter and the first snow had already arrived and that snow would be part of my daily life. Not only because I’d be staying over winter, but also due to our project topic. Little did I know about all the varieties of snow that would be involved. These are among others snow shovelling, conversations about snow, experiencing the excitement of snowfall and the relevance of snow in relation to ice for mobility and transportation. Entering a snowy realm, I am looking at our interdisciplinary research project, through the lens of my discipline: anthropology, which is about human experiences. Through ethnographic fieldwork, I research human-environment relations, collaboration with a focus on arctic ethics and methods, when engaging with locals, in relation to predicted and occurring environmental changes.

About weather and human experiences

Let’s start with a short snippet that captures one of my ethnographic experiences and takes you, the reader, along to the scene.

‘It is a still and calm winter morning; the sky is glooming in shades of blue. We are at the Ammassalik Museum overlooking the harbour of Tasiilaq, silently enjoying a cup of coffee and the view. A Greenlandic song is playing on the radio in the background. The song seems to spark the moment. For my understanding it is mentioned that the band sings about the weather and a simplified translation is provided for some of the lines: ‘No one decides by themselves, it is the weather that decides (for you) in Greenland.’ We nod in agreement, having in mind the vibrating sounds of the piteraq, with the cold wind creeping up and making its way through the cracks into the houses, that happened last weekend.’

Background info: A piteraq is the Greenlandic word for a cold and astounding fierce wind, originating on the polar ice cap and sweeping down the east coast. It translates to ‘the thing that attacks you’, as within the matter of a few minutes it can swipe down and attack you with a great force, with wind speeds of 40 to 80 m/s (for reference that is between 145 to 300 km/h).

The sense of the weather links to lesson number one about life in East Greenland: ‘Don’t expect your schedule to work out according to plan.’ An advice we were well aware of and one which we had received plenty of times before our departure. Still, I was wondering how well we would be able to embody this and let go of control. While it might sound like something negative from a structured and organised perspective, I think it is one of the greatest opportunities as part of my East Greenlandic adventure. Embracing the experience means to learn to let go and follow the rhythm of the weather. It certainly does rule the east coast of Greenland.

Anna shovelling snow for a snow pit measurement in the midst of cold and windy weather in Tasiilaq.

Let’s dive into the snow. We spent a lot of time at least knee-deep in the snow. As the weather changes quite fast, we found ourselves out by the snow sensor on the most cloudy, windy and cold days; amidst heavy snowfall, while hailstones were blowing in our faces or wind gusts were swiping the snow right back into the hole I was digging. This was my ‘hands-on’ practical introduction to snow climatology. In this way, I emerged into a new discipline and learned about snow, climatology and the process of collecting snow data and manual measurements. As it is planned for me, the anthropologist, to perform manual snow measurements throughout my time in Tasiilaq by myself, I was eager to understand as many aspects as possible. At that time, little did I know about unforeseen challenges ahead of me after Jorrit was leaving. Every day is a new adventure and as Jorrit fittingly put it: ‘We are in Greenland, so we have to improvise.’

While each of us has their own perspective, as an individual human being and through the discipline’s lens, it is a process of learning how to bring those together for the benefit of the research and the inhabitants of Tasiilaq. To visualise, each of us might be digging our own hole at times, but we find our way back together in appreciating each other’s expertise and contribution to the research. 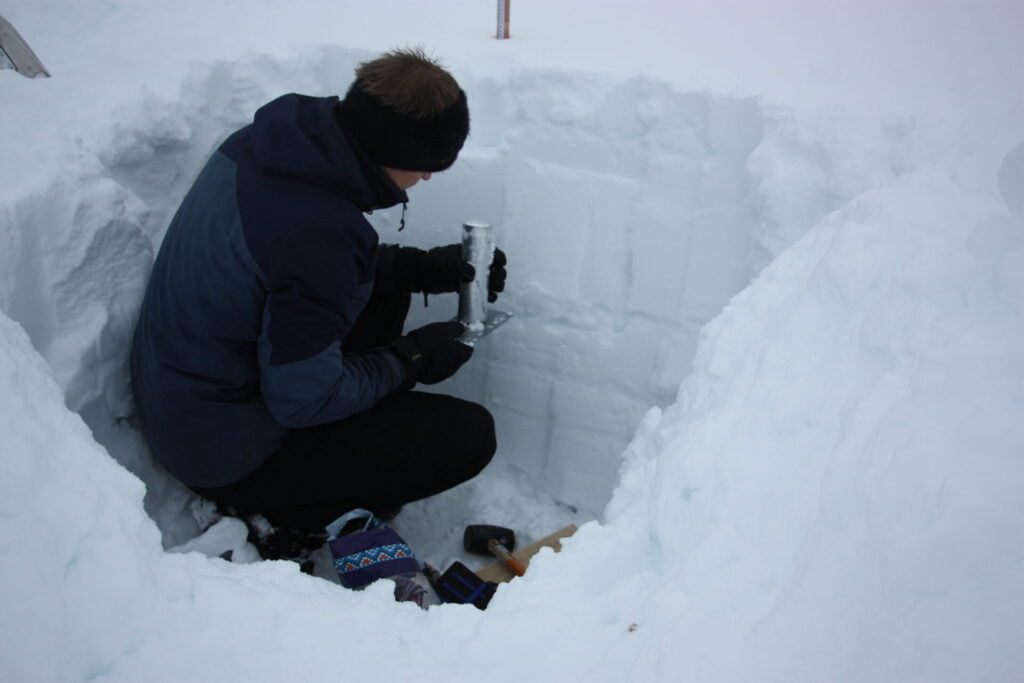 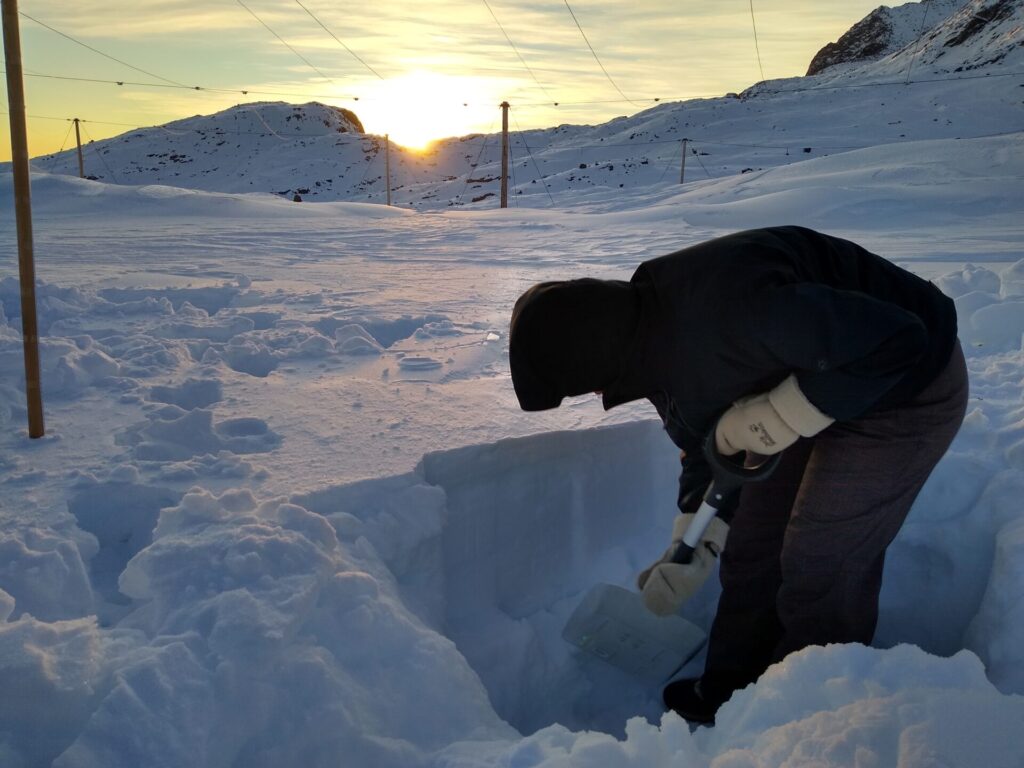 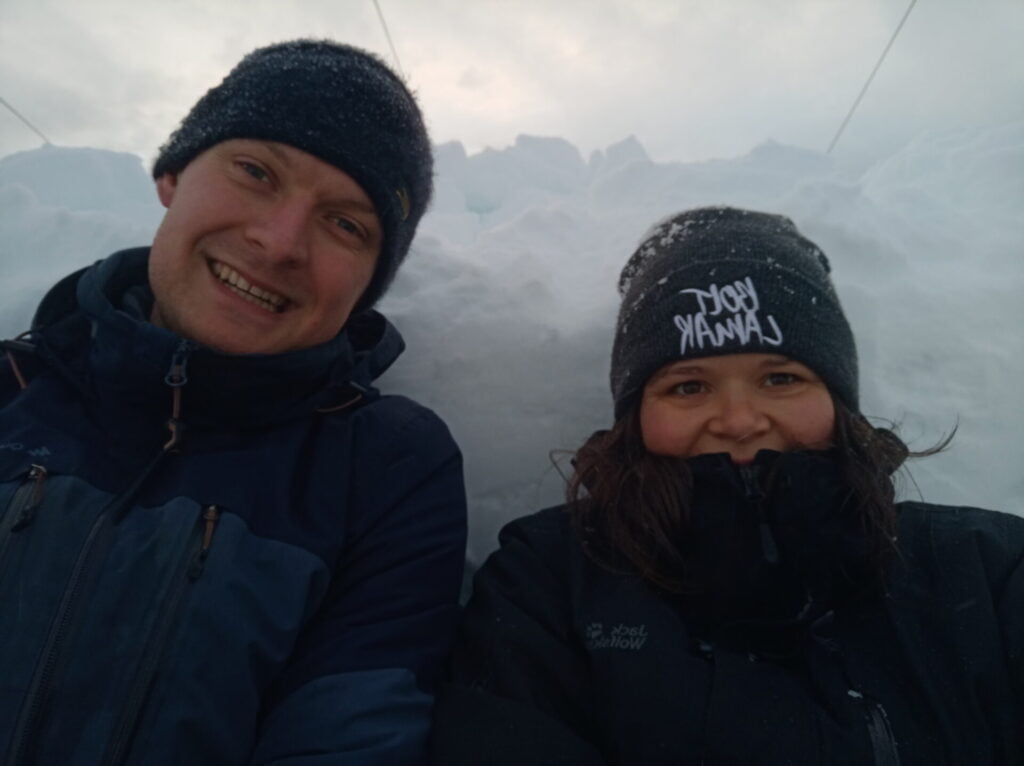 What we are demonstrating with this three-part field report, reveals the strength of our interdisciplinary research. It is about sharing narratives of our individual experiences and reflecting on the process of collaborating. By this, we dare to question and reflect in an open discourse. It is often the small things that create a hurdle but reveal what is perceived as ‘normal’ or ‘usual habit’ in particular settings. We, for example, stumbled across the different usages of specific terms related to snow conditions and how they are used in scientific disciplines and in the spoken language in everyday life. It allows us to think in depth about what we do and value in our own research and how to communicate our understanding in comprehensible ways to other people. Not to forget, improvising in the sense of being proactive and creative on the spot are highly valuable skills in East Greenland.

Lending a hand to the community

Jorrit and I arrived at the Ammassalik Museum, with the intention that it would be a suitable location for our first communal meeting, as it was supposed to reopen soon. I did not imagine that my decisions that day would pave the way for me to become part of the community in Tasiilaq. On the spot, seeing that the museum was far from being ready for an opening, I spontaneously reacted by offering our help to clean and prepare. By now, this has led to weeks of wiping floors and cleaning glass displays, while discovering interesting exhibition objects and listening to stories about them and their role in the history of East Greenland. This has built the foundation for a long-term collaboration with the Ammassalik Museum for the duration of our research project. What’s more, I was blessed to build friendships and engage in learning encounters. By paying attention to what is relevant for the people instead of just focusing on the research topic, I have received a lot of appreciation from the people in Tasiilaq for my contribution in making part of the local history accessible again to everyone, as many people have personal relations to the exhibited pieces. 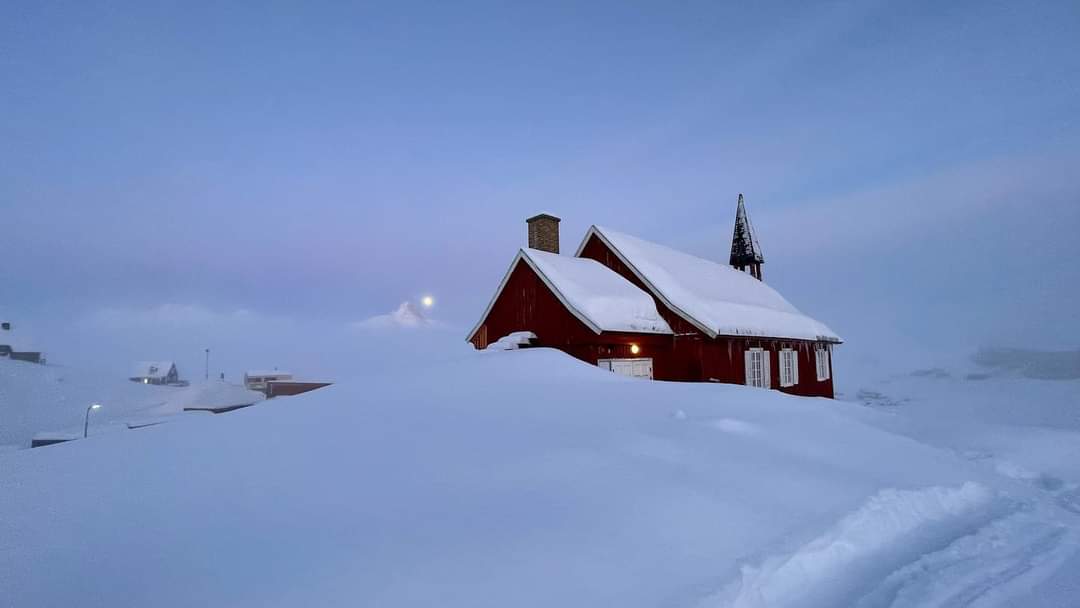 View of the old church, now the main building of the Ammassalik Museum, on a calm and snowy day with a full moon showing, only hours prior to a piteraq.

The power of a cup of coffee

Apart from our activities in the snow, another of our main activities can be referred to as ‘enjoying a cup of coffee’. We have been welcomed with coffee into peoples’ homes or offices. We have introduced ourselves and our work over coffee to the people in Tasiilaq. We shared stories and laughter, just as much as we enjoyed silence and a view with coffee. For any type of conversation, informal or meeting, coffee should not be missing. It is also an essential part of a kaffemik. A lot can happen via a cup of coffee. It is a place where stories are shared, memories revived and images about the future created. What ‘taking time’ means in practice is also the easiest demonstrated over a cup of coffee. It is a mode of becoming part of everyday life and habits, where we experience moments together and come closer to the stories about life shared with us. Also, for the benefit of the research, Jorrit and I had plenty of discussions and talks over coffee on our approach and next steps. Last but not least, don’t underestimate the warmth of a cup of coffee, especially after spending hours outside in the cold and snow.

Background info: A kaffemik is a traditional open house get-together where coffee is served. The Greenlandic word and concept stand for celebrations at home of special festivities such as births, birthdays, first days of school or confirmations. Kaffemik is a simplification of the word ’kappiddilorpuu’, which translates to ‘we are giving coffee’, making it easier for Danes to understand the word. In former days, coffee was a luxury item, which showed appreciation for the guests when shared on these special occasions. The open-door concept allows people to enter, enjoy coffee, delicious food and good company and leave happily, when it is time to make room for new faces to join the festivities. The joy comes from a room full of people mingling. 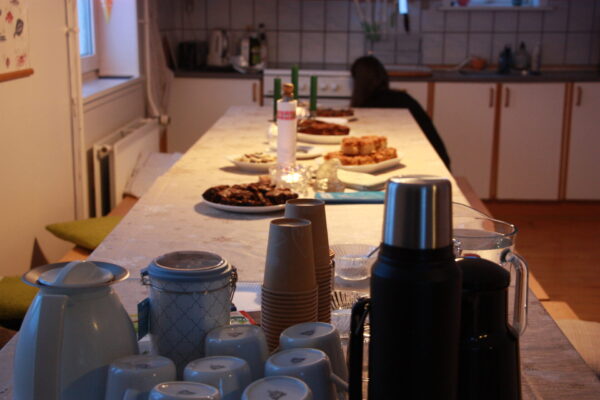 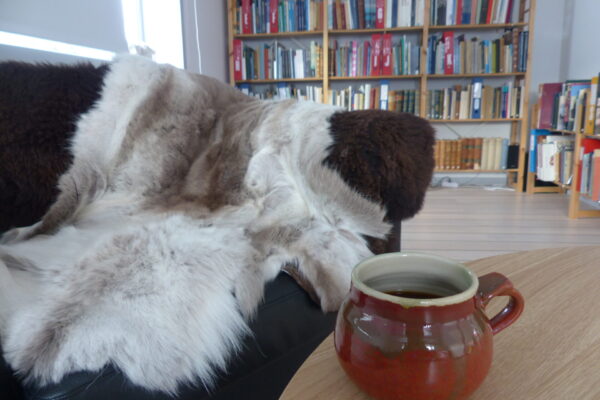 Table setting of a kaffemik and a cosy spot for enjoying a cup of coffee.

One of the biggest challenges of the first four weeks together in Tasiilaq was that Jorrit and I were looking at this particular time frame from different angles. It was considered the entering phase of the fieldwork. Yet, for me it was the beginning of an eight-months stay of living in Tasiilaq, whereas for Jorrit it was a four-weeks stay of meeting people and initiating research to be continued when he returns in June this year. While I did not worry about time at all, Jorrit seemed more concerned about time in relation to the progress of our work. This can be a tricky balance, when keeping in mind that taking time also for the benefit of the collaboration with the local people is essential. I strongly believe that these four weeks have been a great start, where we were able to demonstrate our concern for an appropriate approach when engaging with the people in Tasiilaq, which was welcomed by many locals. With Jorrit’s departure, a different and exciting period has started for me. A time where I am representing and conducting the research on my own and now juggle with Jorrit at a distance, while ‘being there’ in Tasiilaq. Gazing at the mountain range outside my window, I am happy and looking forward to what awaits me next. 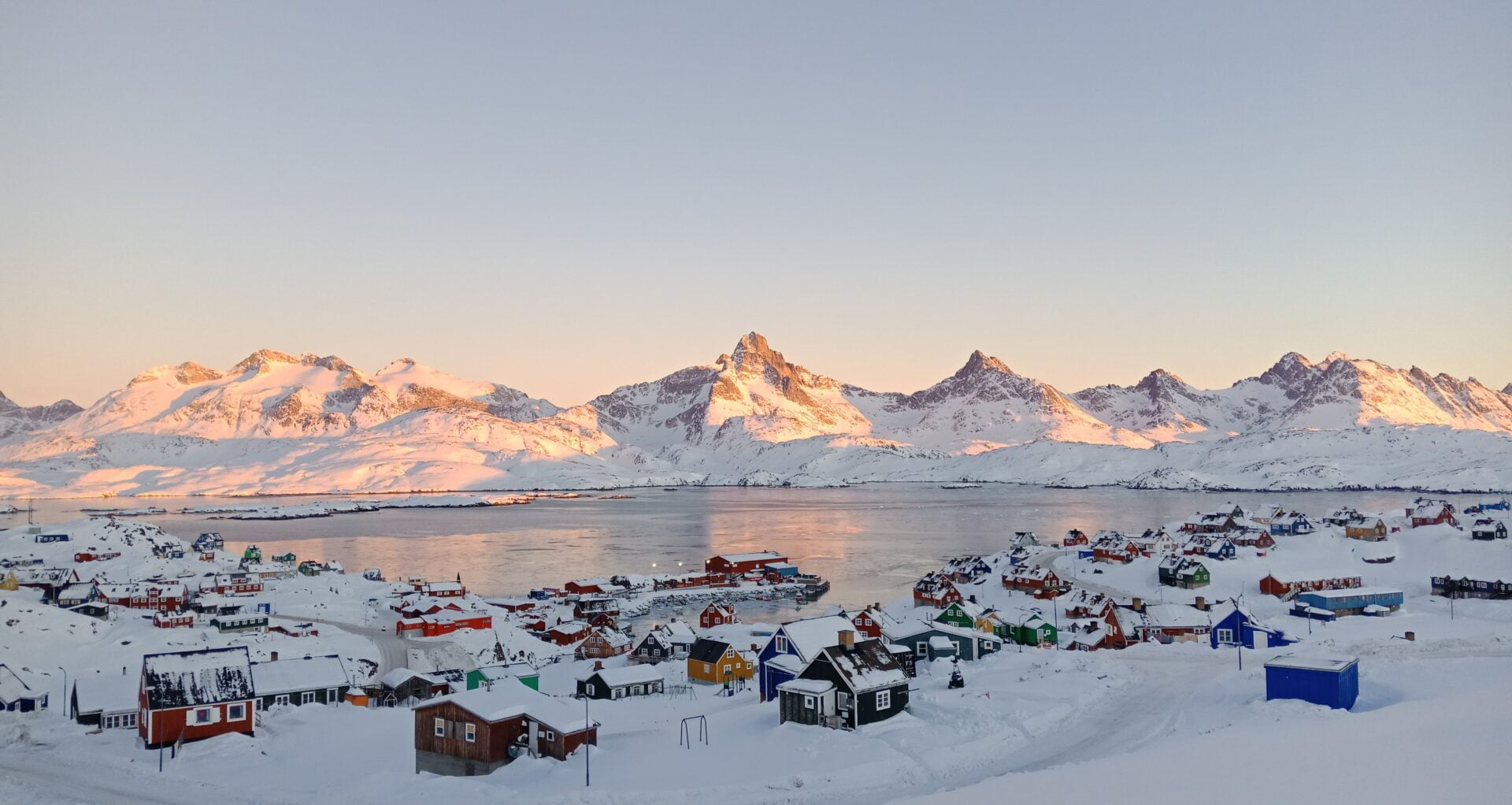 View over the town of Tasiilaq with the mountain range in the background.

Anna Burdenski, PhD student at the department of Social and Cultural Anthropology, University of Vienna.