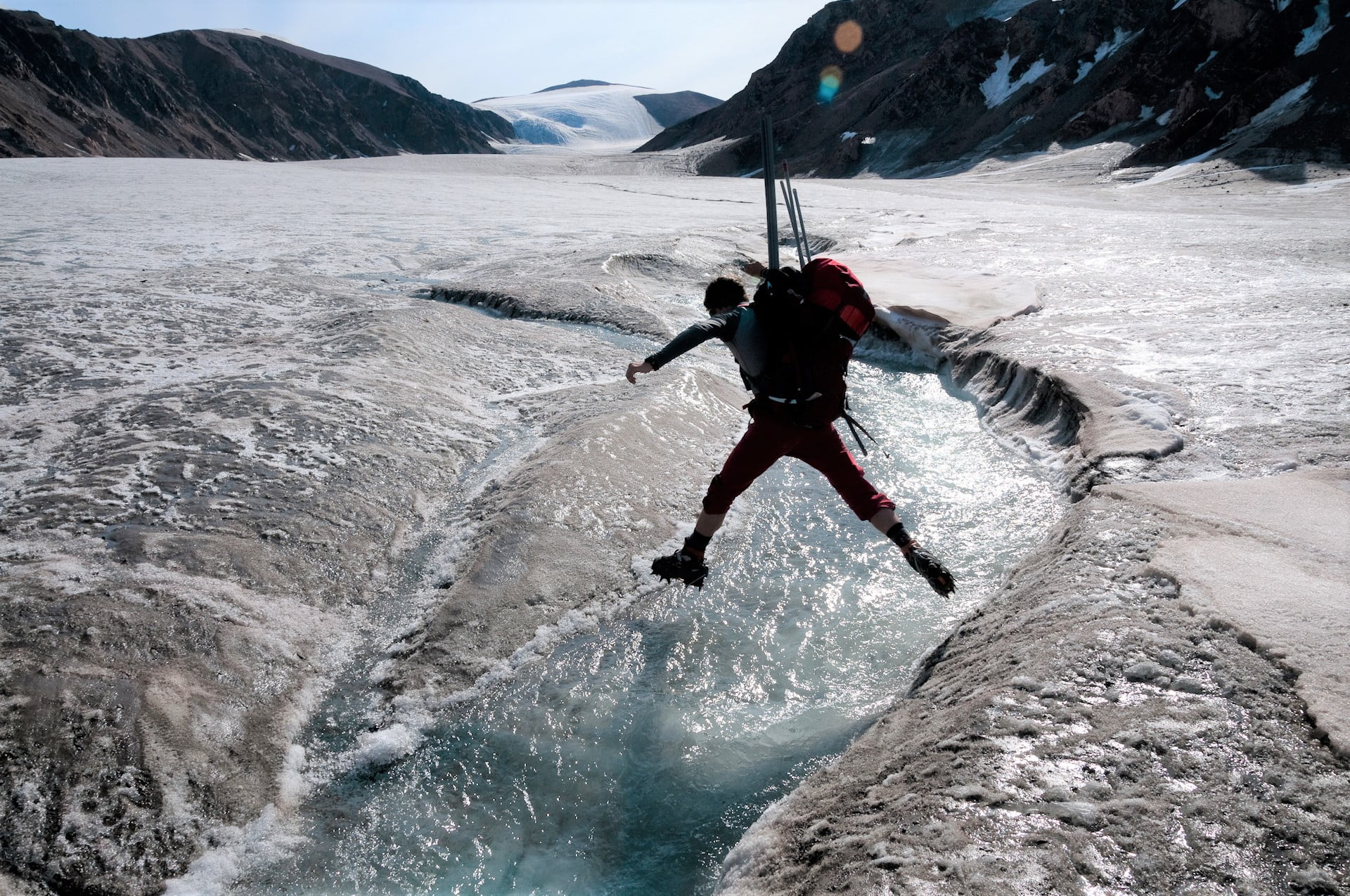 The long way up - by Gernot Resch

“Goodbye Zackenberg” also meant “goodbye sun“ for our time at the campsite because it was in the shade of the surrounding mountains except early night and some hours in the afternoon. In combination with the constant cold air flowing down the valley, it was not as comfortable as the sunny green planes surrounding Zackenberg.

The next days we would usually leave around 10:00 after having warm porridge and doing the daily we-are-still-alive-call with the satellite phone to Zackenberg station. Our backpacks were heavy, weighing around 25 – 30 kg, sometimes more. To make the long hike to our working-place on the glacier easier, I divided it into smaller sections: Around thirty minutes to the moraines, then 1 1/2 hours to the glacier snout followed by 2 hours on the ice until we reached the weather station. Although the last part was the longest, I had the feeling of almost being there after stepping on Freyas snout and getting up the first steep meters. „Only a few more minutes of walking, only some small jumps across the supra-glacial streams or crevasses.“ I love the constant sound of crackling ice under my crampons, it’s very meditating and thoughts drift away.

The flat area in the valley in front of the moraines was nice: Filled with sand, cushion plants, moss and life. Walking over slippery stones next to the glacial stream, over steep snow patches, or doing some easy climbing above the white water with a heavy backpack was the most interesting part of the hike. Gernot Weyss knew it from his visits in the years before, but this time we were two weeks later than usual and so the small creek he knew had turned into a wild, 4 m wide whitewater-river where we searched our way upwards. Cold katabatic winds from the glacier and the water made this quite a chilling part of our hike. After several kilometers of moving forward very carefully, we reached the steep front of Freya. Finally, some real soil to walk on!

For the next six kilometers we walked on ice until we reached the flat area where we set up our automatic weather station. On the way up we passed ablation stakes that were drilled into the ice. Every stake has colored tape on it, making it easy to know how much of it was still frozen into the ice. Every time we passed one, we made a short stop to note the exact position and ablation. During the short warm summer months, Freya faces pretty high ablation rates: 10 cm per day are not unusual.

Gernot Weyss had spent at least two weeks on Freya each year between 2008 and 2012, so he knew her (yes, because Freya is a gentle female glacier) quite well. Where to go and where better not to go. The most dangerous areas on glaciers in summer are probably the ones hidden under a white cover of snow: This means mostly that you jump over these white patches or avoid them if possible. Maybe there’s just solid ice under it, maybe a 10 m deep hole. In the flat sections of the upper part there weren’t any crevasses but ponds, filled with water and ice. In the cold hours of the night, the surface froze and it was possible to walk on them carefully, but during the day it was better to avoid them because you never knew whether they were only a dozen centimeters or a meter deep.

It took us around 4 hours to reach our work place in an area glaciologists call “superimposed ice and percolation zone”. Up to that point we carried a 4 m long mast made of aluminum as well as lots of sensors for measuring wind speed, ice- and airtemperature, radiation, humidity and others. After setting up the mast, Gernot configured the sensors and I either helped him, measured ablation in the accumulation area or gathered water for cooking from the ice ponds.

“This was our reward for the long hike: A hot bowl of Nasi Goreng or Jägergulasch, followed by a pack of chocolate each.”

The reward after a long day at work (Gernot Resch).

But not only the chocolate itself was important, also the plastic bag from an Austrian supermarket we stored it in was one of our most important tools: You could use it for storing things, it was durable and very importantly it was a dry place to sit if you were tired. Due to the long ascent we always tried to stay at the weather station as long as possible and returned to our tent around 05:00 in the morning, immediately falling asleep in our sleeping bags.

The weather was perfect: No clouds, no snow storms, no fog, no nothing except sunshine. Everything was good, maybe too good. After some days a very human thing appeared in our minds: At first you are happy that you get what you desired. But after some time you get used to it, the happy feelings turn into uneasiness about “What if I lose what I have now? What if it gets bad now?“ From this moment on, you cannot enjoy the situation as much as before. To us, this happened with the weather. At first we were so happy that there were no storms and nice conditions, but after some days we discovered tiny clouds appearing over the mountains and looked at them in uneasiness as if they were heralds of a possible storm heading our way. What if we would have rain and bad weather the next days? It took a while until we recognized what was happening to us. Together, we laughed about it and tried to put these thoughts away, but in the back of our heads this small unhappy feeling remained until the weather station was finally set up, all instruments were installed, all measurements with the geo-radar and mass balance observations were done and the first part of our field work was over.

“Sometimes too good is not just good.” 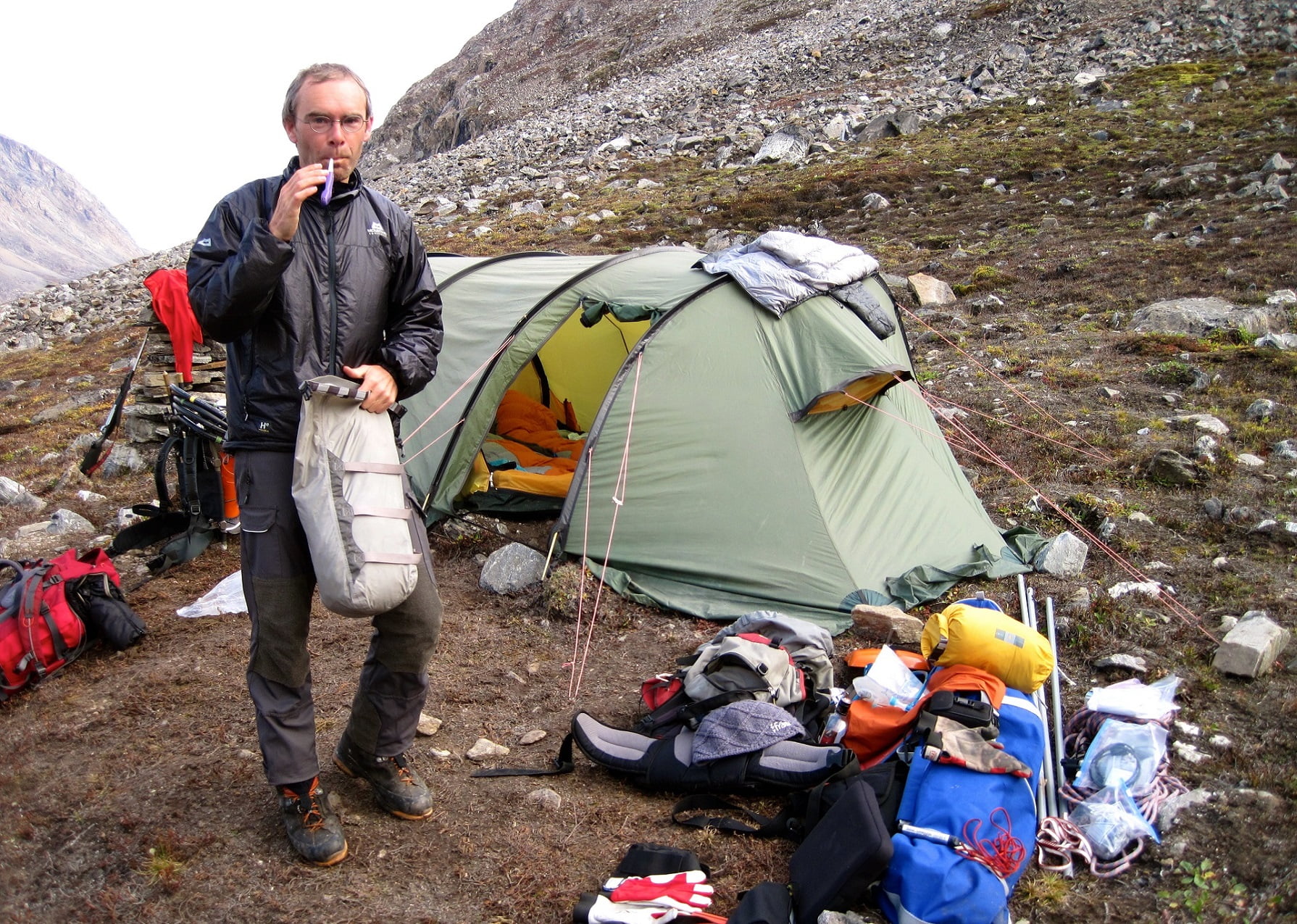 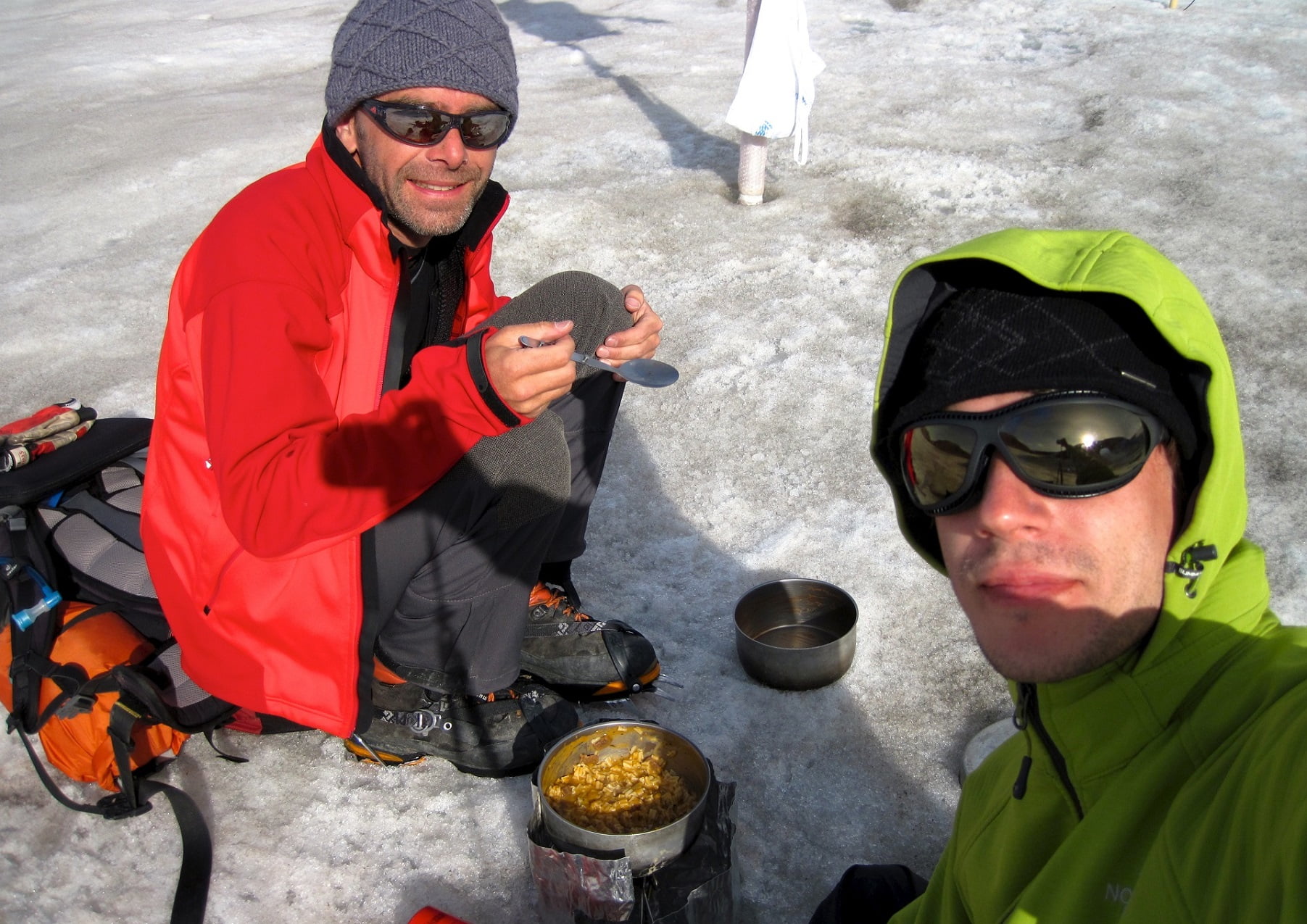 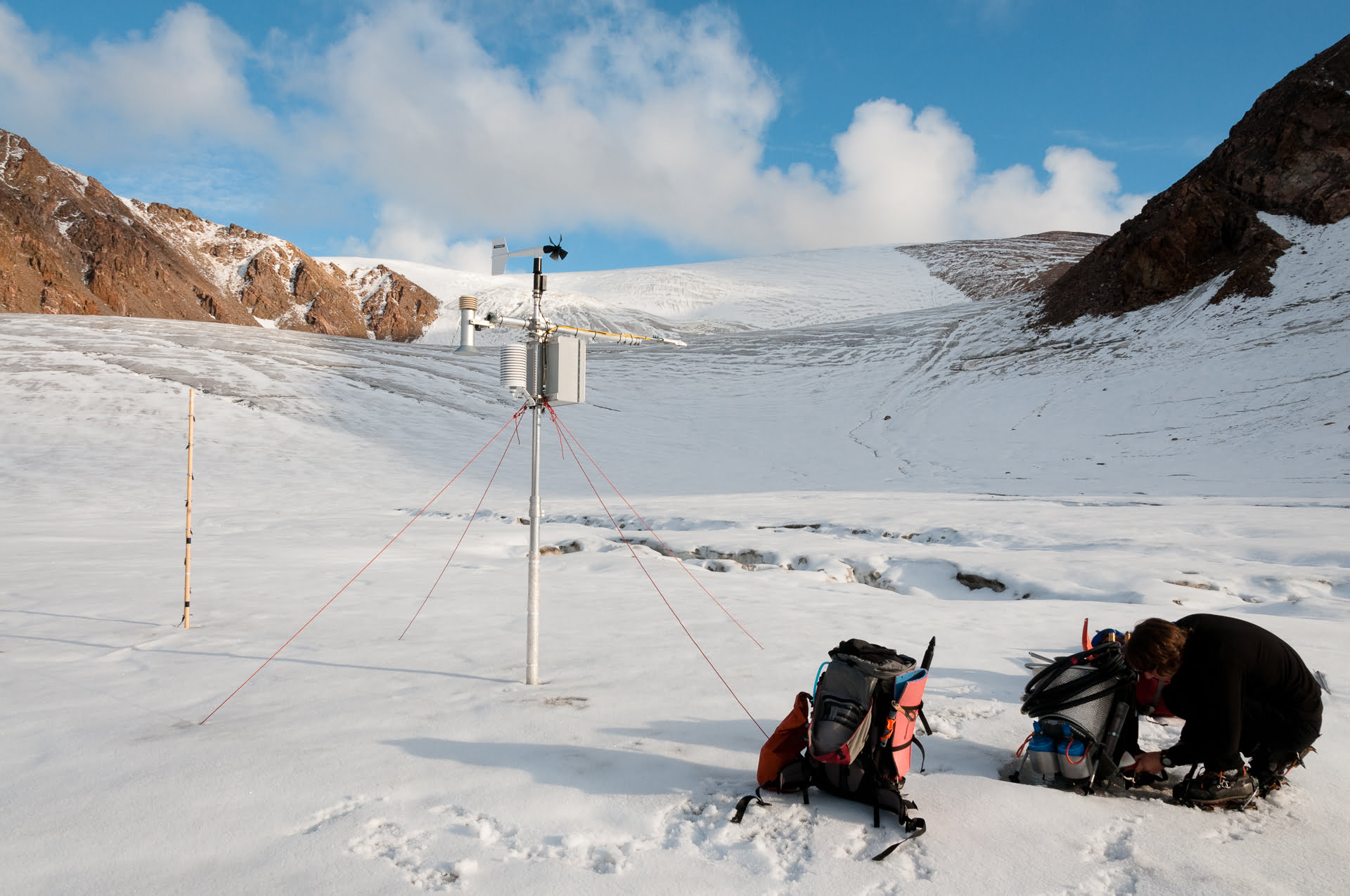 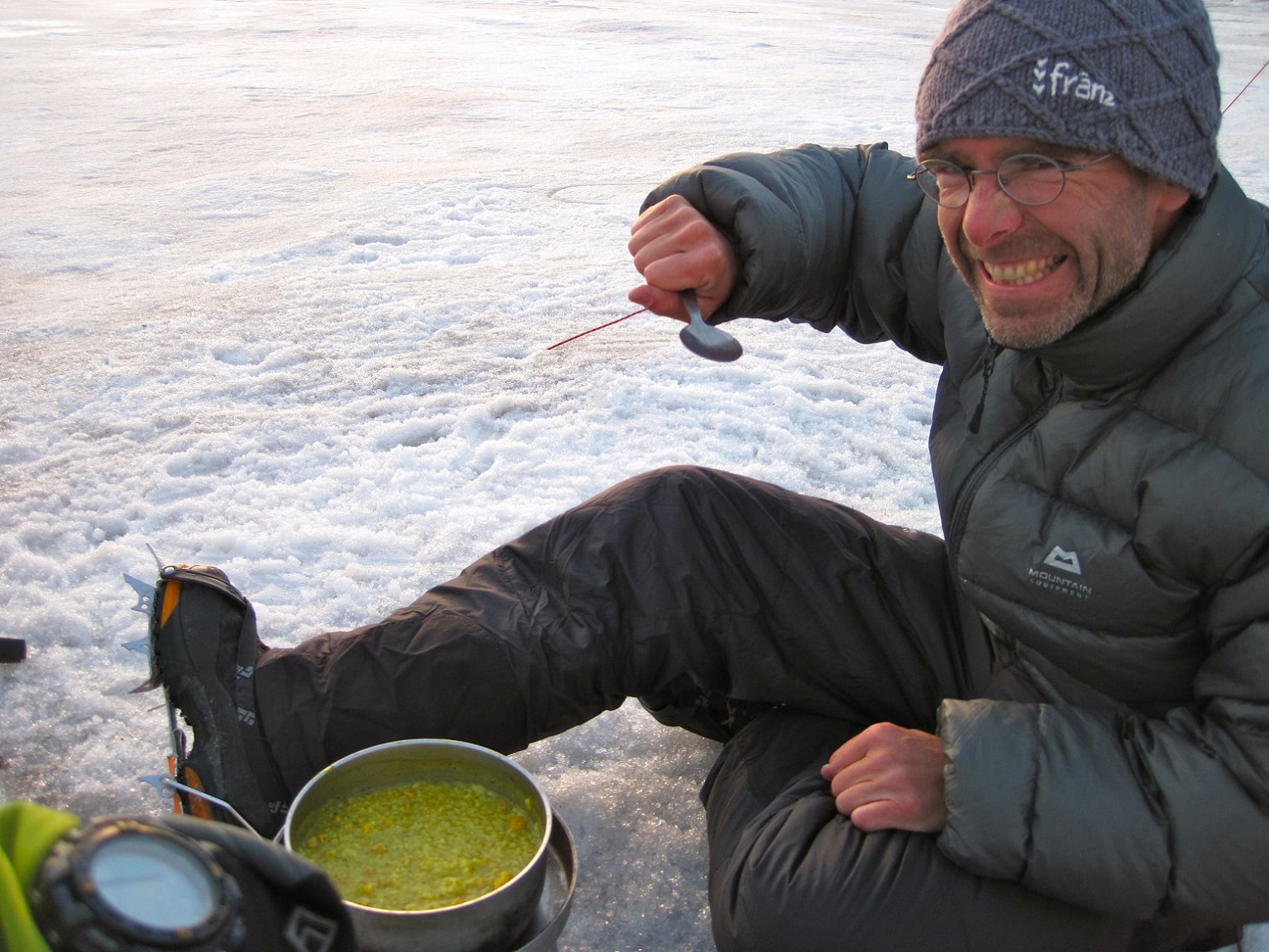 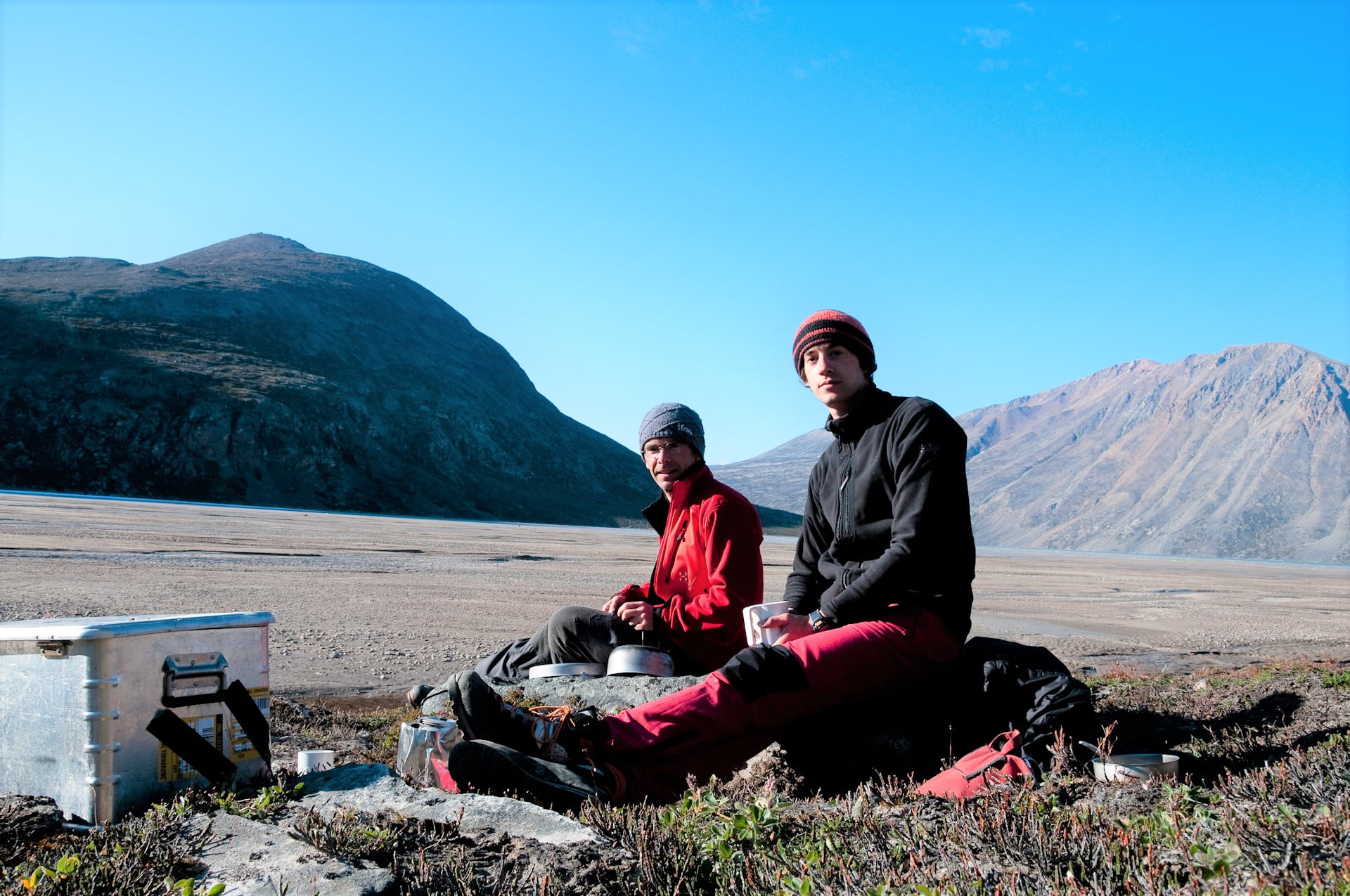 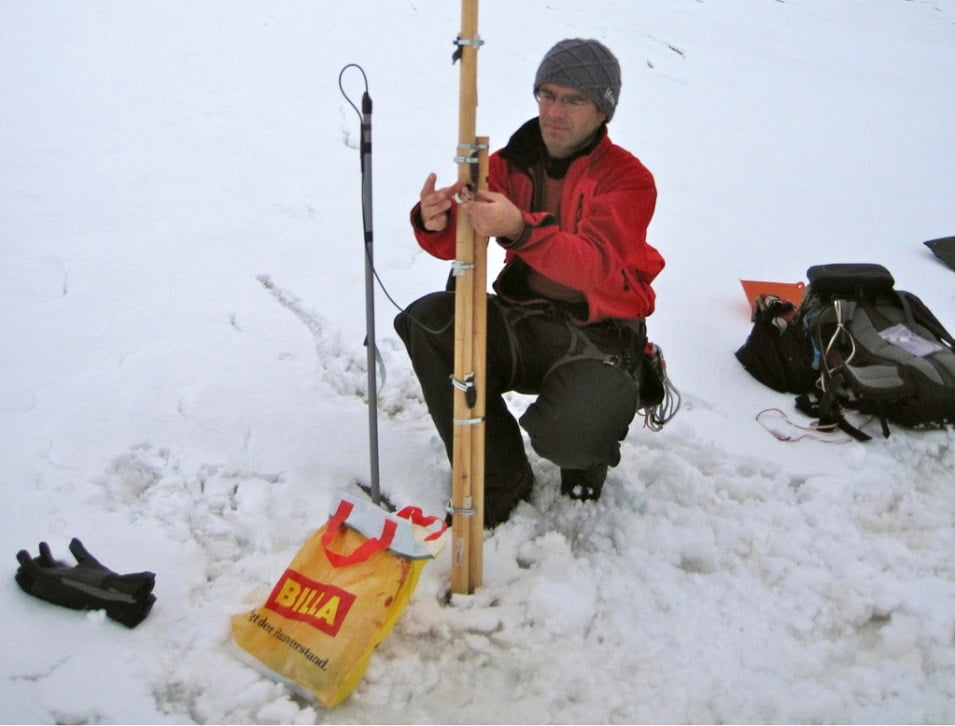 After a week of work on the island, everything we planned was done. We hiked down to our campsite with light hearts and empty backpacks at 06:00 in the morning, knowing that the first part of our stay here had come to an end. Like every time on the way down, we passed a strange phenomenon, an estimated 150 x 100 x 10 m depression where the ice had melted on the glacier’s left side. This time, we stopped and started making assumptions about its possible origin. In the end, we concluded that the most unlikely cause was that warmer meltwater from the nearby mountain ridge could have melted a cave and it crashed, leaving behind the hole. But the most likely explanation seemed to be that it originated from a flying saucer frozen into the ice which got finally be free due to climate change.

“Suddenly, a picture came to our minds with a spaceship landing right next to us, doors opening, steam coming out and the late Elvis, 150 kg, in a shimmering, sparkling, shiny white suit stepped out, dancing on Freya and celebrating the successful construction of our weather station with us.”

We left Elvis behind and continued on our way down. After putting down the tent and carrying everything back to the coast, we sat on the coast next to the water with a big smile, a chocolate bar and the last sips of my grandmother’s Nut-Schnaps, waiting for the boat which would pick us up with the morning flood. In a week or so, we would return to continue our work and prepare the station for the winter. The wind stopped for a brief moment. We could only hear the waves rolling in. A poem from the library at Zackenberg came to my mind:

The sounds from the Arctic

become voices from the deep,

which keep talking from the endless time,

are just guests for a moment.

After arriving back at the station, I headed to the kitchen for some breakfast and Lone, our cook, standing there, listening to Elvis’ Rock’n Roll in the kitchen. Life offers much more than you would expect!

Later, back in Austria, I used the gathered data from this year and the following seasons to investigate the formation of superimposed ice. My results showed that between 10 – 15 cm of it are formed each year between June and July in the accumulation zone, which was a contribution of about 6 – 9 % to the net accumulation of Freya. This means that compared to other glaciers it only plays a smaller part in the mass balance and melts away in two days during the short Arctic summer.

“But on a large scale it is a small piece in the puzzle of understanding the environment a bit better, which is what research is all about.”

There are two webcams that have been set up by Bernhard Hynek and Daniel Binder where you can watch what’s happening on Freya:
Freya1
Freya2

Written by Gernot Resch.
Edited and layout by the APRI-media team.
Contact: use our contact form.
Photos, when not stated otherwise: © Gernot Weyss