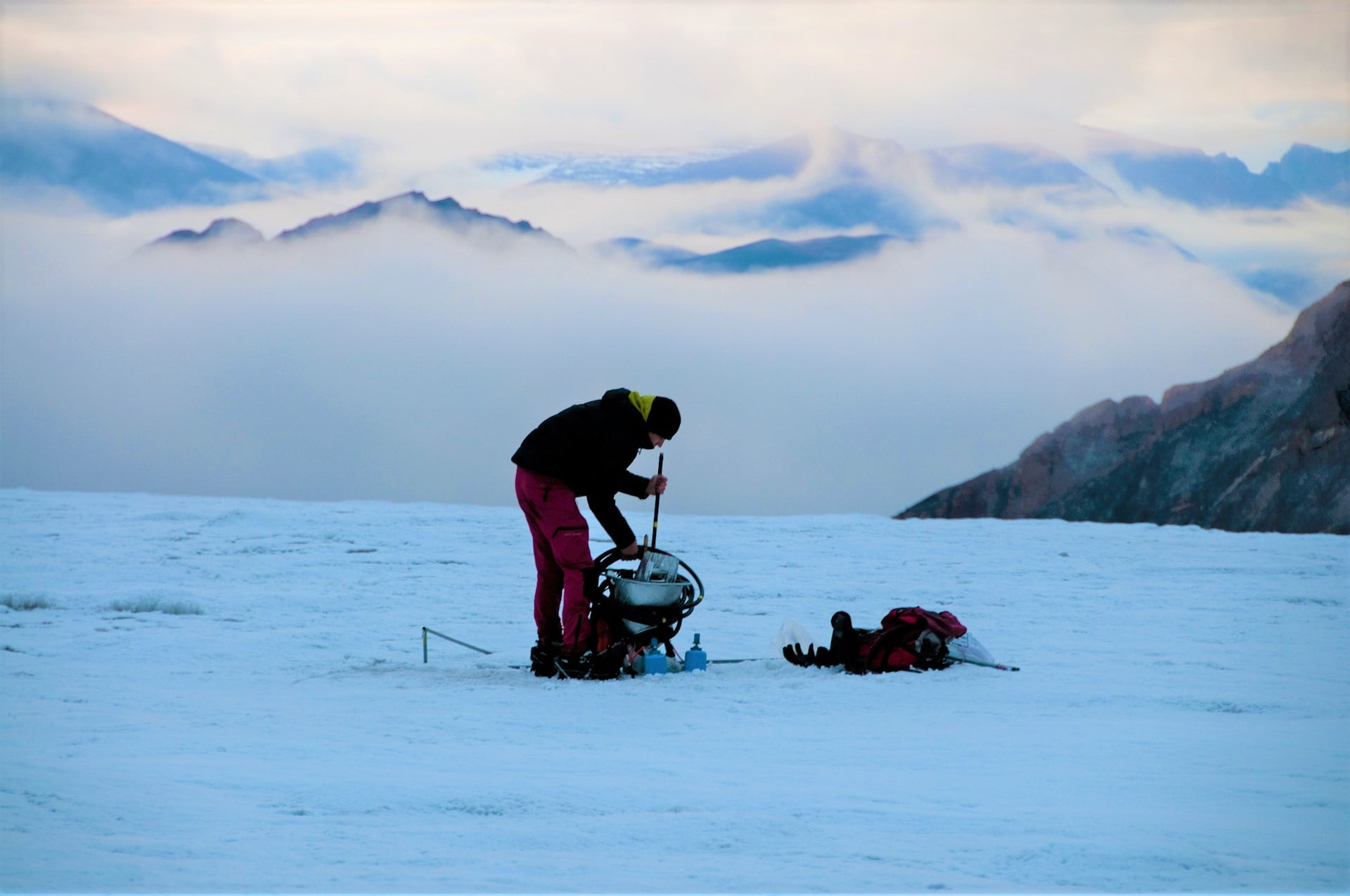 Someone knocked at the door. I looked up and Bernhard Hynek, one of ZAMGs glaciologists, entered my office. It was January 2011, I was working at the ZAMG as a student-researcher apart from studying for my Bachelor. “Do you want to go to Greenland this summer?”. I instantly replied with a happy “YES!”. This was the beginning of an incredible chapter in my life.

“Situations like this are a once-in-a-lifetime-opportunity, where the door of life opens a bit wider than normally.”

Every summer since 2007, researchers from ZAMG pack their bags for going to Freya, a glacier of the size of Austria’s Pasterze on Clavering Island. It is at 74° North in the remote landscape of Earth’s largest National Park, North-Eastern Greenland. This year, Gernot Weyss and myself could spend four weeks in this wonderland, doing research for “Project Refreeze” which should provide data for my Bachelor and Master thesis. We wanted to spend most of the time in a tent on the island but also some days in the ecological research station Zackenberg, which was about 10 km away. The plan was to set up an automated weather station and install ice and snow temperature sensors. With this data, I wanted to run a snow model for my investigations.

During the short arctic summer, glaciers face pretty high ablation rates: We observed up to 8 cm per day in August 2011.  But not all meltwater flows to the sea: Arctic glaciers are so cold that in early summer, when the snow starts to melt and the meltwater percolates through the snowpack, it may refreeze, forming a special ice called “Aufeis” or “superimposed ice”. It is a layer of bubbly ice, filled with lots of air bubbles, residing between the snow and the glacier surface. On some glaciers it is an important factor for the mass balance where up to 60 % of the meltwater refreeze. On others only minor amounts are created each year. It’s a large uncertainty when calculating the mass balance of an Arctic glacier and we wanted to learn more about the situation on Freya.

The growth of superimposed ice is controlled by the glaciers thermal properties and depends on the amount of the available melted water. It continues during the summer until the underlying media remains below the freezing point. Arctic glaciers are often much colder than the ones found in the European Alps. During our stay we found crevasses filled with slowly refreezing meltwater, or small caves in steeper areas with stalactites and stalagmites.

In 2011 we were walking in old footsteps: The swedish glaciologist Hans Wilhelmsson Ahlmann started doing research there back in 1939 (Ahlmann 1941, Ahlmann & Erickson 1942). But due to the world shaking events of World War 2, he couldn’t continue. His research assistant stayed in Greenland for one year and had a real adventure until he could go back to Europe. Freya was afterwards left alone for almost 70 years until glaciologists from ZAMG set their foot again on  ice in 2007.

On a distant planet

Zackenberg was how I imagined a base on a different planet: Isolated and remote. Very remote. It’s closed during winter and  between 10 – 20 people reside there in summer. The station staff are two persons: The logistics person, handling everything from gun training to repairing the water pumps and a cook. Everyone else is a scientist (or tries to become one like in my case). The neighbours are a small danish military special unit called “Sirius Patrol”, 30 km away. No one else for hundreds of kilometers in all directions. Sometimes, one of the soldiers passed by for a quick cup of coffee during their 70 km training-runs which included the 1600 m of “Mount Zackenberg”. The animal neighbours, mostly Muskoxen, Lemmings and Arctic foxes mostly wanted to be left alone and enjoy their peace. Only the unavoidable Mosquitos were really happy about our visit. One day, a raven dropped a welcome-gift for us, the leg of a rabbit. Or maybe he wanted us to leave? We asked him about his intentions, but he only croaked and flew away.

“Everything felt remote in Zackenberg. The only connection to the outside world were emails: short and without pictures, handed on a USB-stick to the logistics person for sending it via satellite.”

New incoming emails were printed out each morning and pinned on a black board in the kitchen building. As it is far North, the sun never sets during summer. Because of its geographic position, there is almost no rain and mostly nice weather in the area, which are the reasons why it is named “Arctic Riviera”. There are no roads or cars, the station is surrounded by large green wetlands and is situated next to a river. Each Wednesday, a small plane arrived with a fresh supply of fruits and scientists from all over the world. When we were there, we met people from Canada, Finnland, Sweden, Denmark, Spain, Russia and South Korea. I fell in love with the place immediately.

One day we had the very rare opportunity of watching a serious Muskox bull vs. Polar bear-encounter. An old bull passed by between the houses, directly heading towards the wooden Polar bear used for target practicing. It slowly walked directly towards it, standing for minutes without movement and kept staring. After some minutes it seemed to have made its decision: He made a quick step forward, knocked our poor Polar bear down and proudly continued  walk towards the shore.

For our time on Clavering Island we stuffed our bags with important things like chocolate or Travellunch-Jägergulasch. But also many instruments found their way into the bags, equipment for setting up a remote weather station directly on Freya’s ice. With the data gathered we hoped to feed a snow model for simulating the superimposed ice. With the afternoon tide we crossed the fjord on a small boat and waved to the two danish who shipped us across a “goodbye Zackenberg!”. Then we were even more alone than before and found ourselves in a huge valley, embodied by mountains with German names like “Mount Moltke” and “Eiger”. Only accompanied by two musk oxen, rippling water and the ever blowing wind we started unpacking.

For now we left most of the heavy stuff in boxes at the shore and headed inland to find the usual camping spot of the Austrian teams that camped here before, half way between the coast and the older moraines of Freya. The place was really nice: Mossy and flat, next to a spring with a great view over the vast braided riverbed. We went back and forth between the coast and camp several times to get the most important stuff and started our gasoline stove to prepare a hot meal. The “kitchen” was around 50 meters away from our tent. This distance was necessary due to polar-bears possibly following the interesting smell, and hopefully they would find the kitchen more interesting than us. We enjoyed the silence, listening to the sounds of the constant blowing wind, the hissing of the gas stove and the rippling of the small creek.

The plan was to stay for six days on the first trip, then go back to Zackenberg and stay there for a week, then return here. But we packed food for 10 days in case anything would go wrong. During last years expeditions there were often heavy storms and due to the conditions the small boat couldn’t cross the fjord for days. With the extra food we made sure we didn’t had to starve if that happened.

Written by Gernot Resch.
Edited and layout by the APRI-media team
Contact: use our contact form.
Photos, when not stated otherwise: © Gernot Weyss