Through the "Nationalpark Kalkalpen" with the Climate Walkers

As we reported in the article about the Climate Walk project, the big Climate Walk from the North Cape to the Portuguese Atlantic coast has been postponed to 2022 due to Covid and replaced by a kind of test run “Geh’ma Austria” this year. I had the pleasure of following the Climate Walkers on one of the sections of the Austrian Walk. The APRI supports the Climate Walk as an initiative of young scientists who want to shed light on the anthropological and sociological perspectives of climate change, mainly by talking to the residents of the regions along the more than 12,000 km long route.


From "Hengstpass" into the heart of the national park

Just as we were sitting together with our unexpected visitors at the large table of the bivouac site Weißwasser, who had come especially to meet the Climate Walkers, the thunderstorm started. It had been expected all afternoon, but in the end arrived in the late afternoon and ended the almost unbearable sultriness. The thunder was massively amplified by the narrow valley and the lightning was quickly followed by the booming thunderclap. At the same time, the Weißwasser rushed and swelled so much within thirty minutes that the drumming rain, the thunderstorm and the grey stream very much dominated the ambient sounds. We retreated under the wood camp shelter, cooked dinner and enjoyed the red wine which Luis and his friend had brought as a gift to us hikers, while the downpour put the campsite 5 cm under water. When you expose yourself to nature, which is a goal of the Climate Walk, you have to expect such events and be prepared accordingly. Our interesting visitors told us vividly and with a lot of humour about their initiatives and actions to save the Reichraminger Hintergebirge from industrial uses such as cannon test sites of the Austrian steel company Voest or a hydroelectric power plant.

Biwouac site before the thunderstorm. 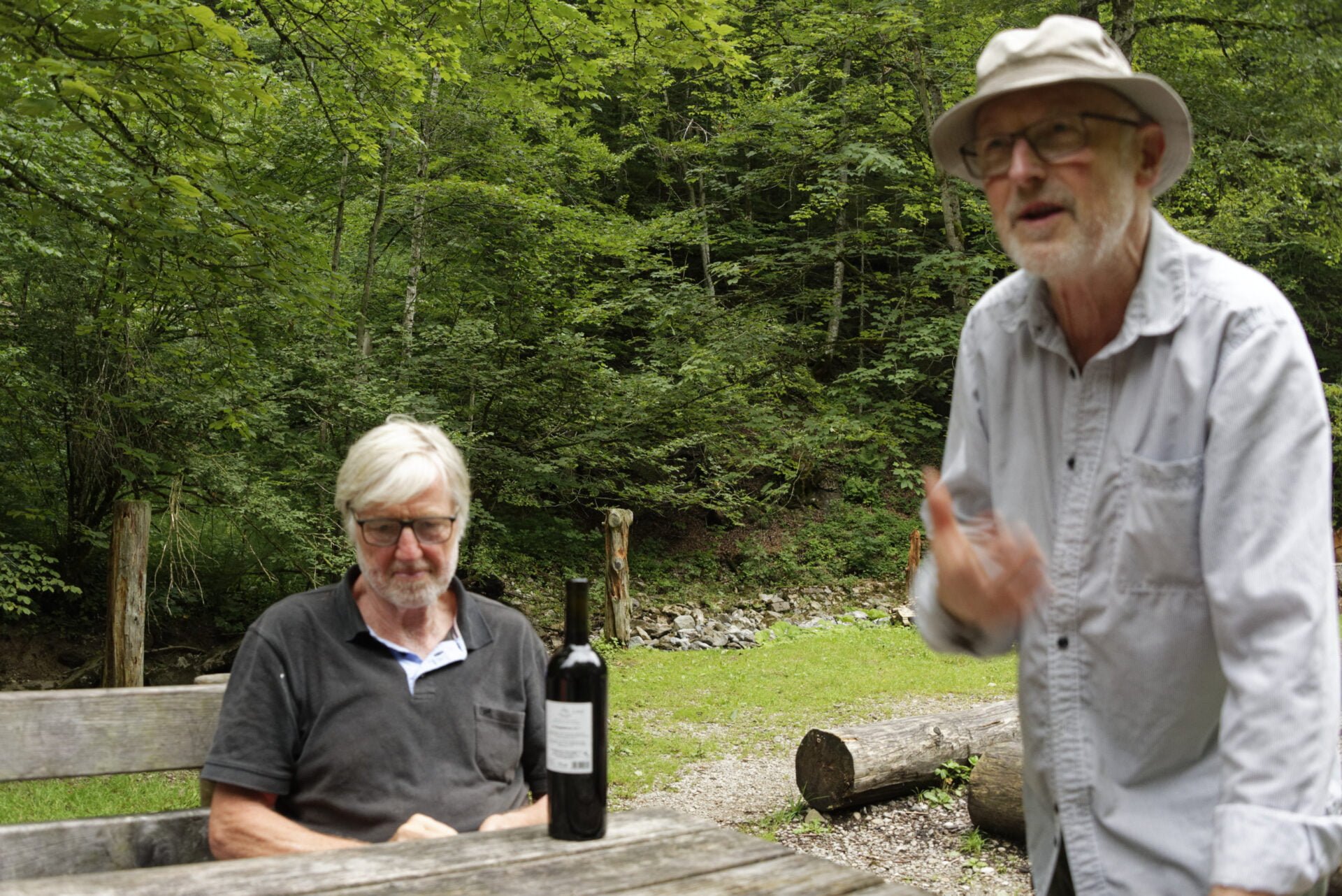 Our unexpected visitors and activists. 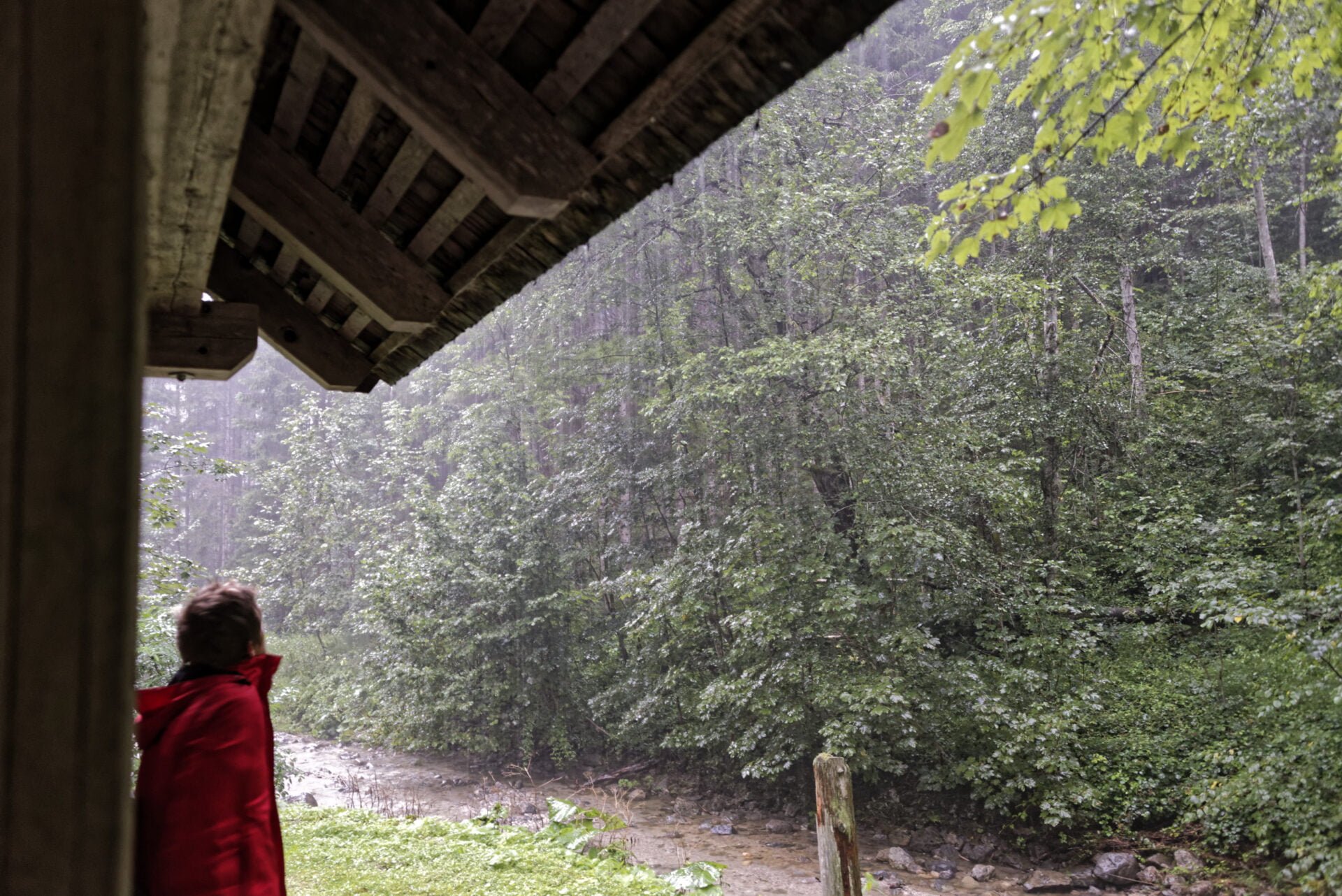 The wooden shelter was very much welcome … 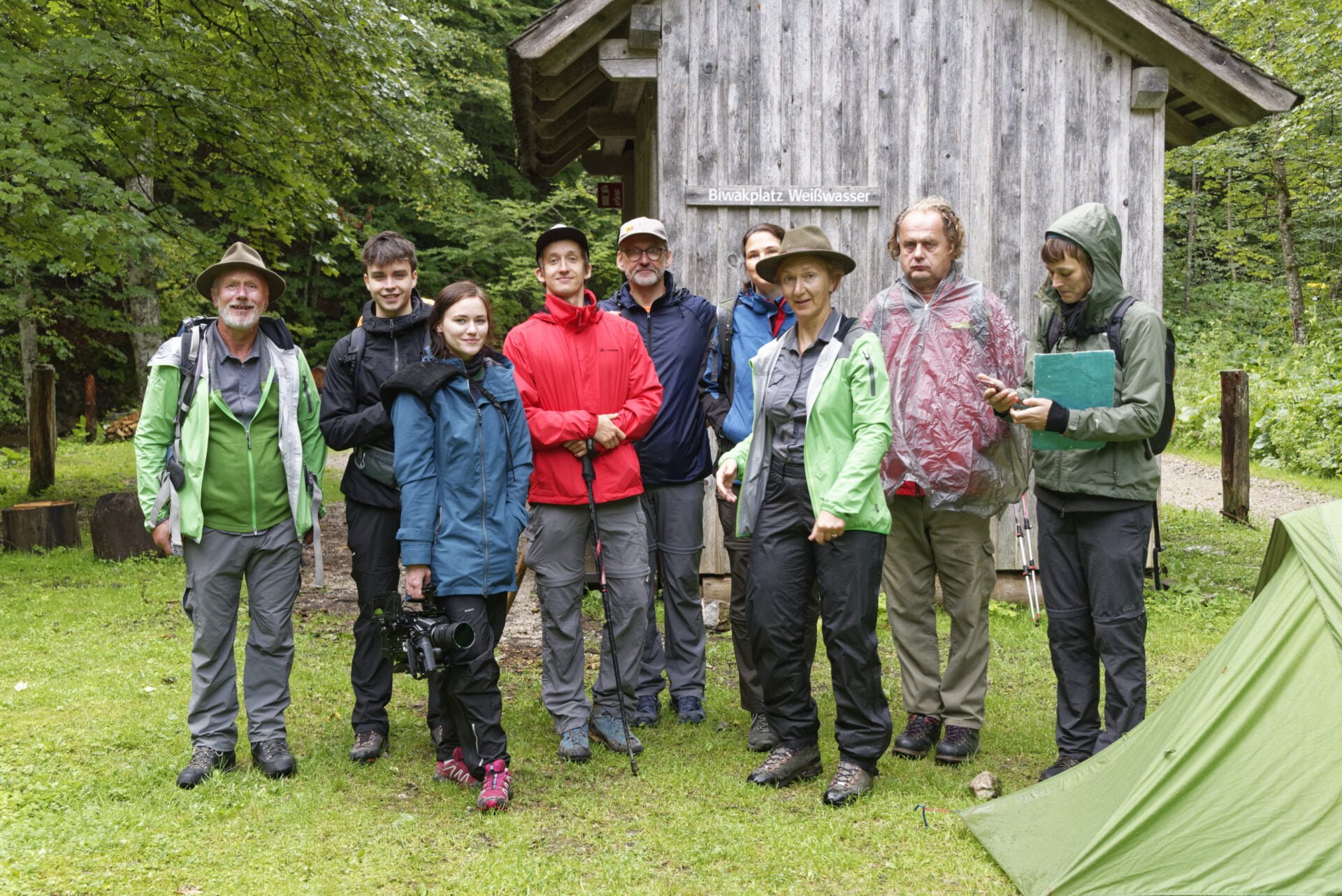 With the ranger through the nature reserve

But the real goal of crossing the Reichraminger Hintergebirge – the incredibly beautiful and remote part of the Kalkalpen National Park between Hengstpass and Reichraming – was the guided tour with National Park Ranger Hermann Jansesberger, which could take place on day 2. The weather became milder, the turbid and wild Weißwasser became whiter again after the rainy night and its water level dropped. The day even promised some sun and warmth. Dipl.-Ing. Dr.in Sigrid Netherer from the Boku Vienna also joined us on this day with her husband and, together with Hermann, explained the influence of the warming climate on the bark beetle population. Due to climate change, the average annual temperature in the Austrian Alps has already warmed by almost 2°C since the beginning of the 20th century. 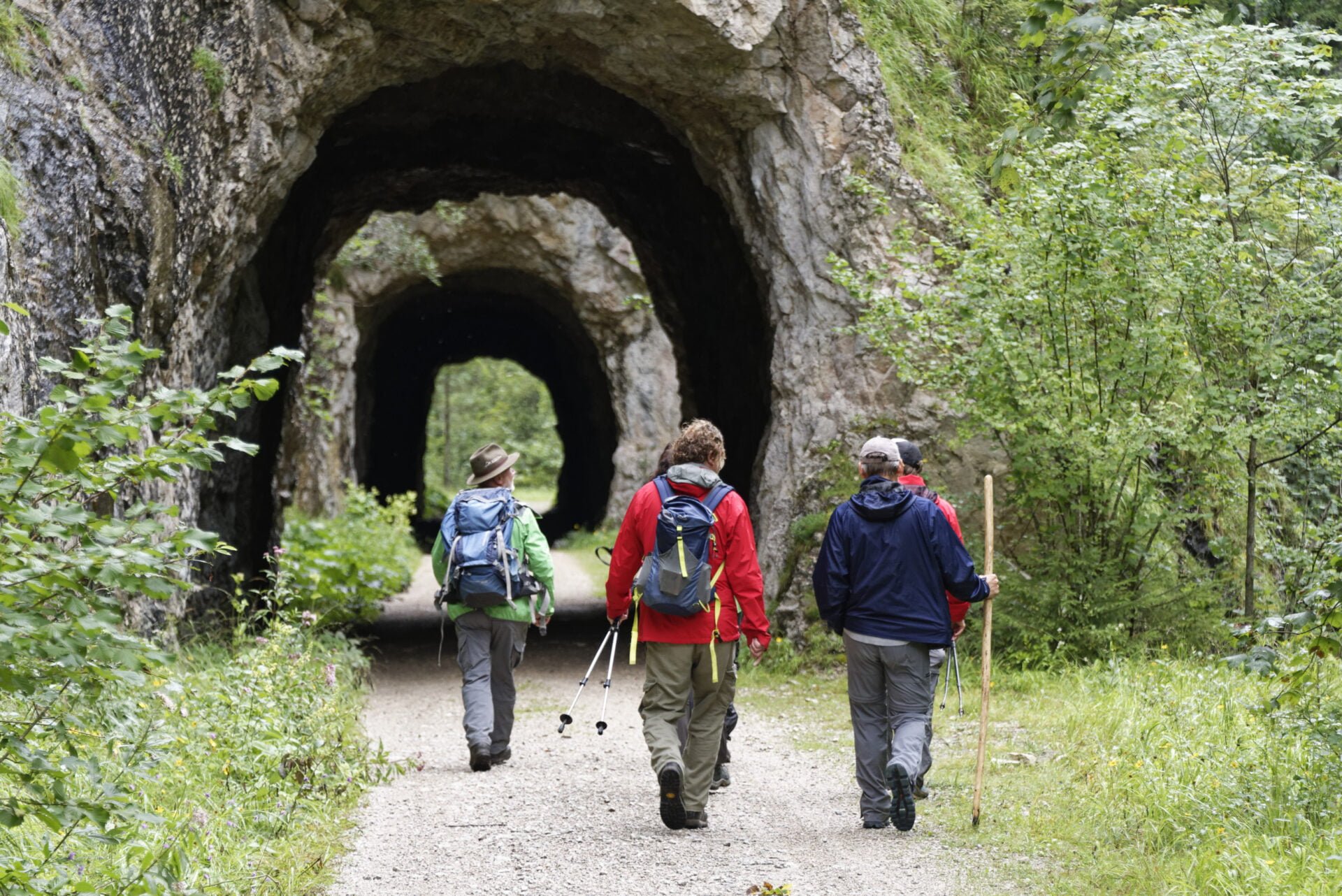 Along the old forest railway track. 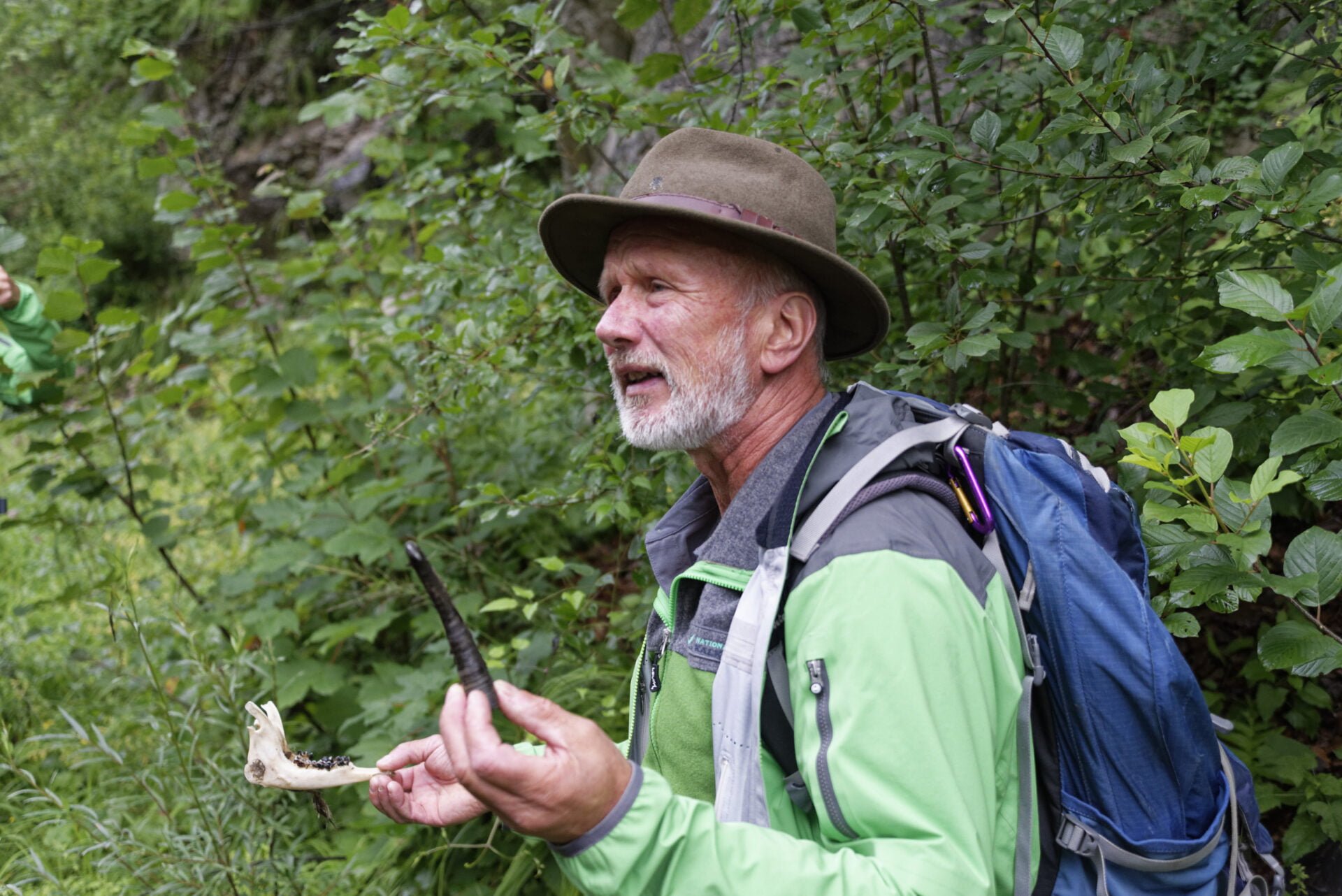 Ranger Hermann tells from traces about the life of a dead chamois. 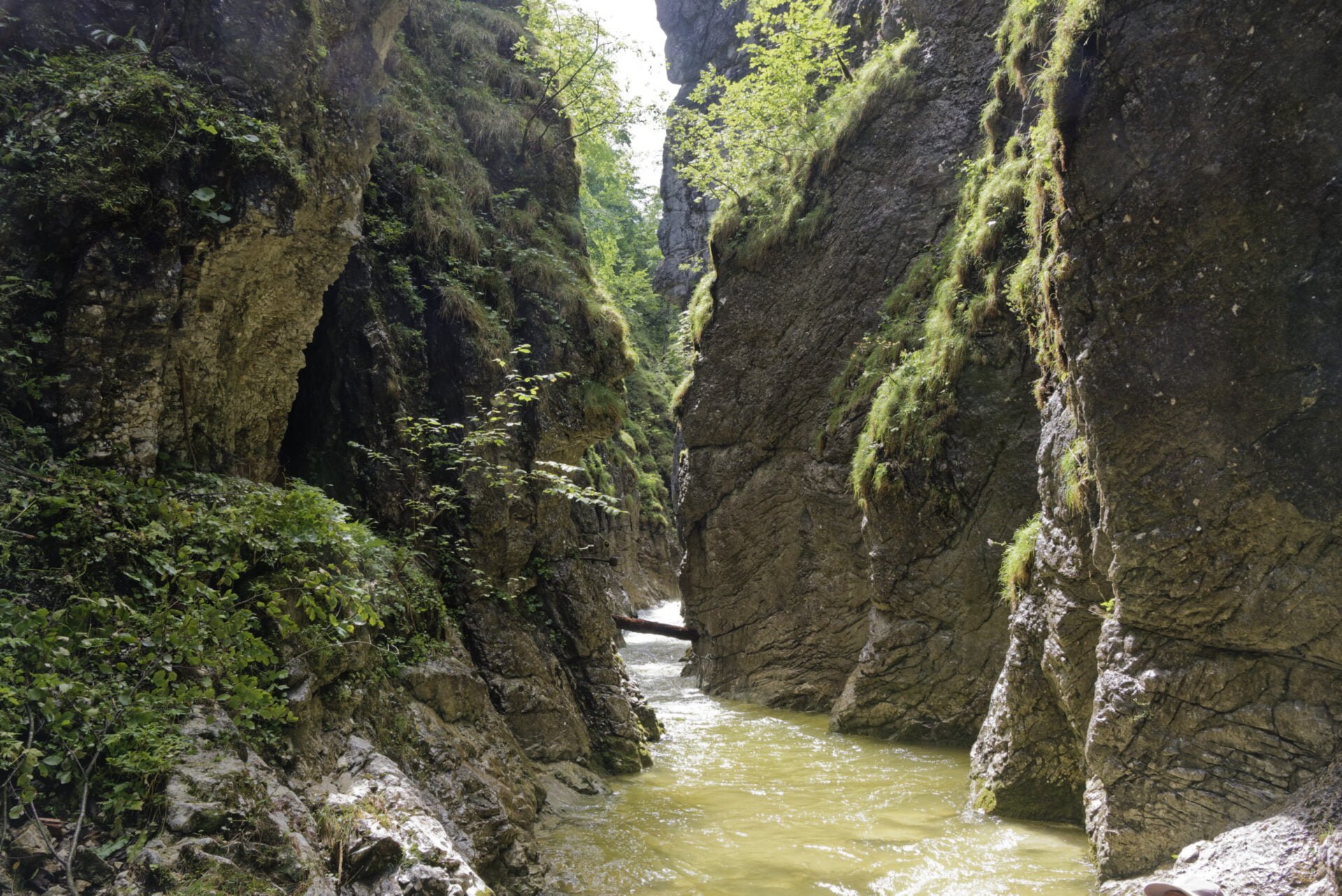 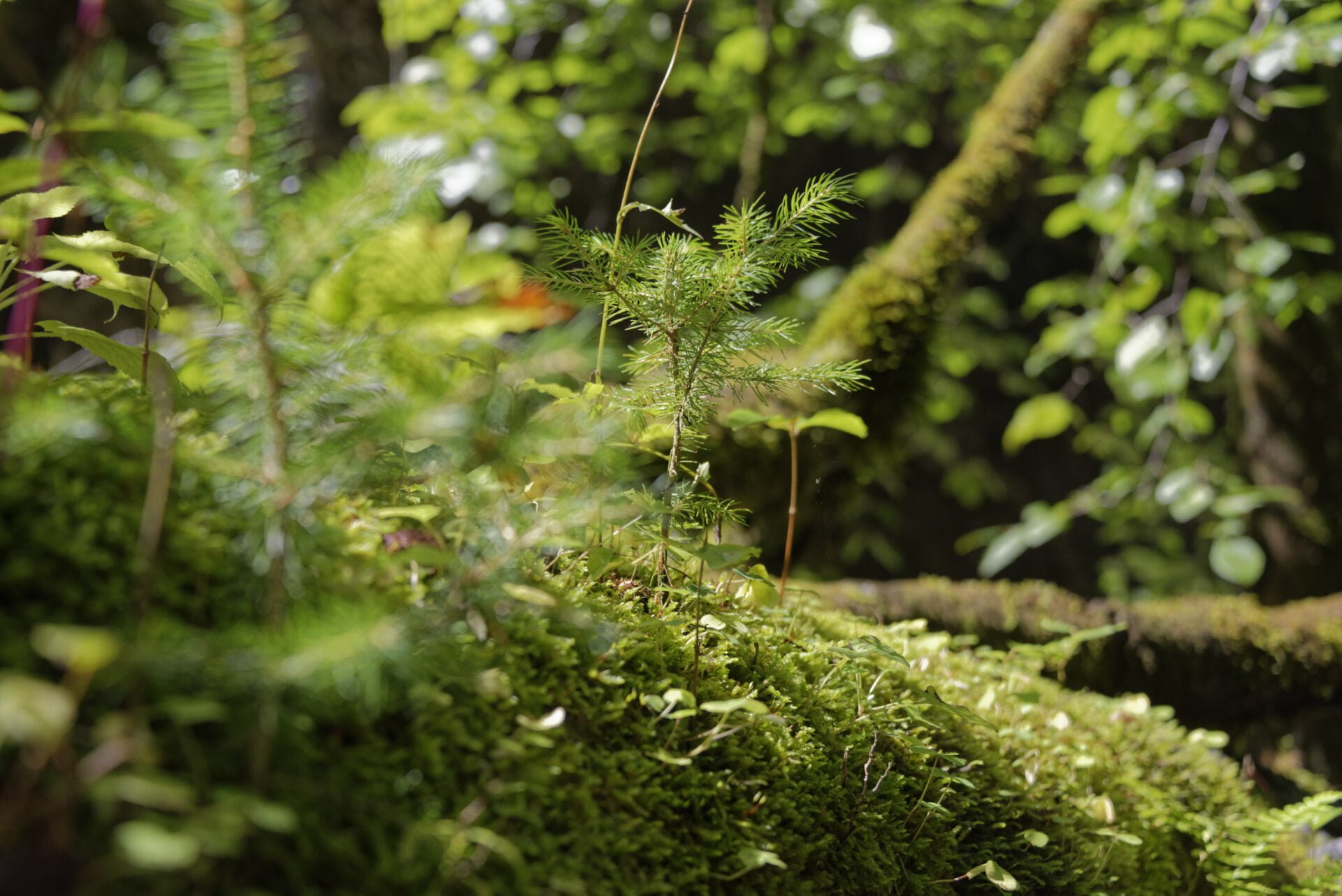 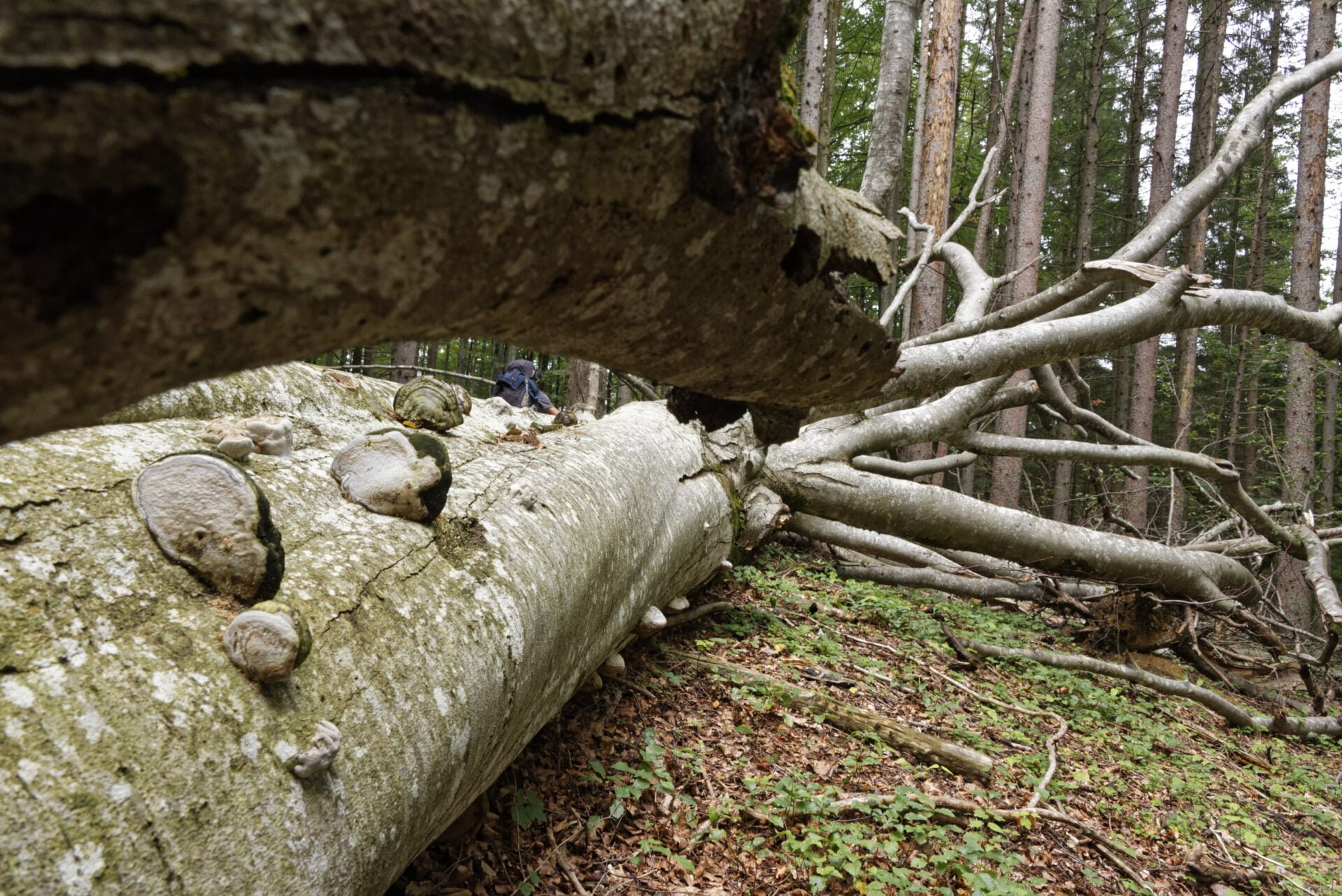 The lifecycle of bark beetles

Specialising in spruce, the European spruce bark beetle (Ips typographus) lives in a natural association with the trees, whose barks it tries to penetrate at weak points. It does not succeed easily, as the resin pressure immediately washes the boring beetle away. However, if the tree is weakened, e.g. by dry periods and hot spells, but also by diseases or by forestry damage to the trees, male beetles succeed in a mass attack to drill a hole in the bark and create a rummage chamber behind it. The female beetles are animated by attractants of the males through a sexual mating rite to lay eggs in niches of the maternal duct in the bast. After a few weeks, the larvae hatch from them, eat their own side passages and pupate over 5-6 larval stages to then become finished beetles in 5-6 weeks. Due to the extension of the breeding season from April to October caused by climate warming, not only do sibling broods occur – the adult females lay a second wave of eggs without further fertilisation – but also the young beetles can already reproduce themselves again, thus causing exponential multiplication in several generations of beetles. As a result, entire forest areas are infested and soon die off, causing massive damage to forest owners. There is no forestry intervention in the national park. The spruce stands before the creation of the national park in 1997 are most affected by this, but not so much the mixed forest with natural beech and fir stands that has emerged since then. 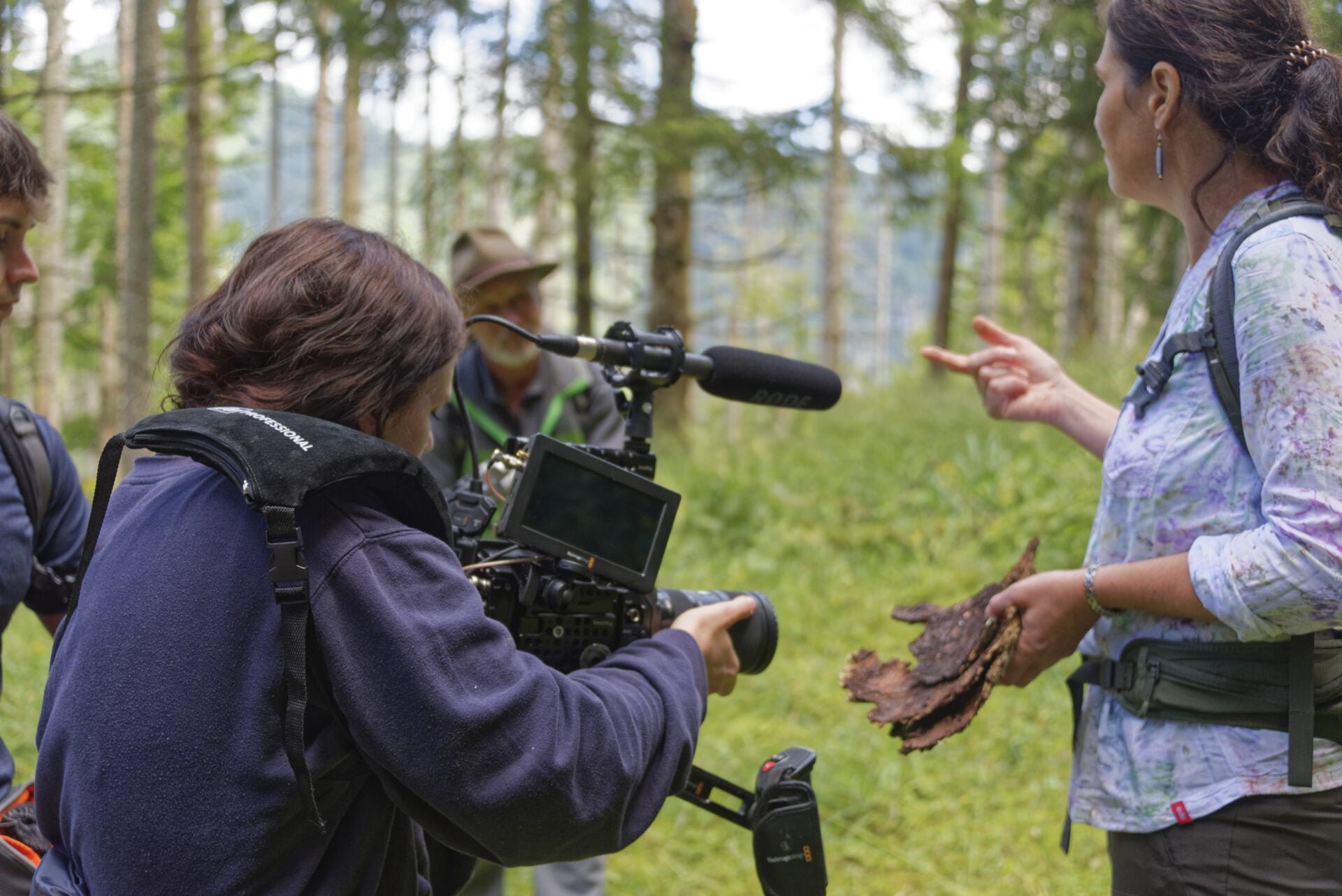 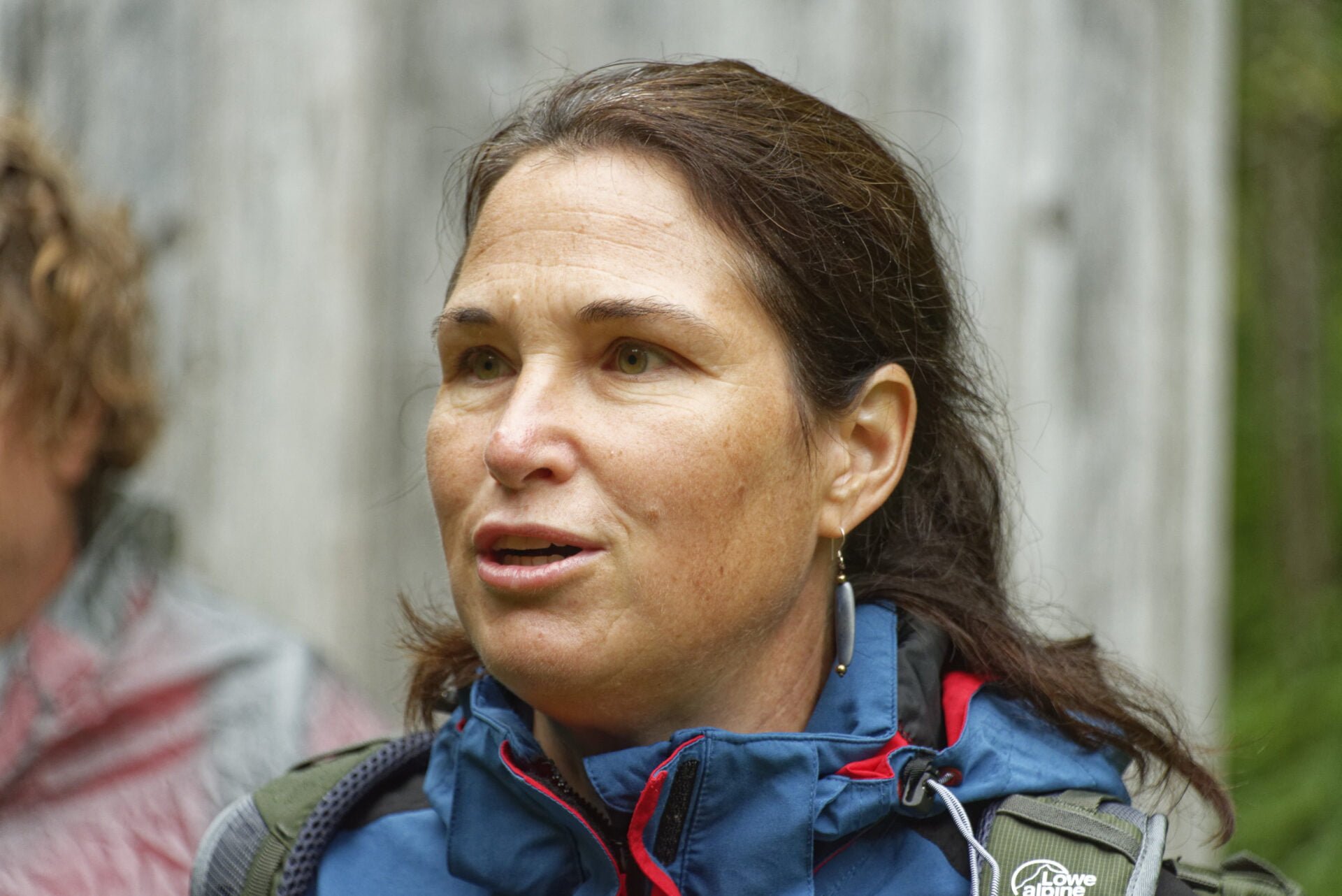 Bark beetle galleries in the bast of a spruce. 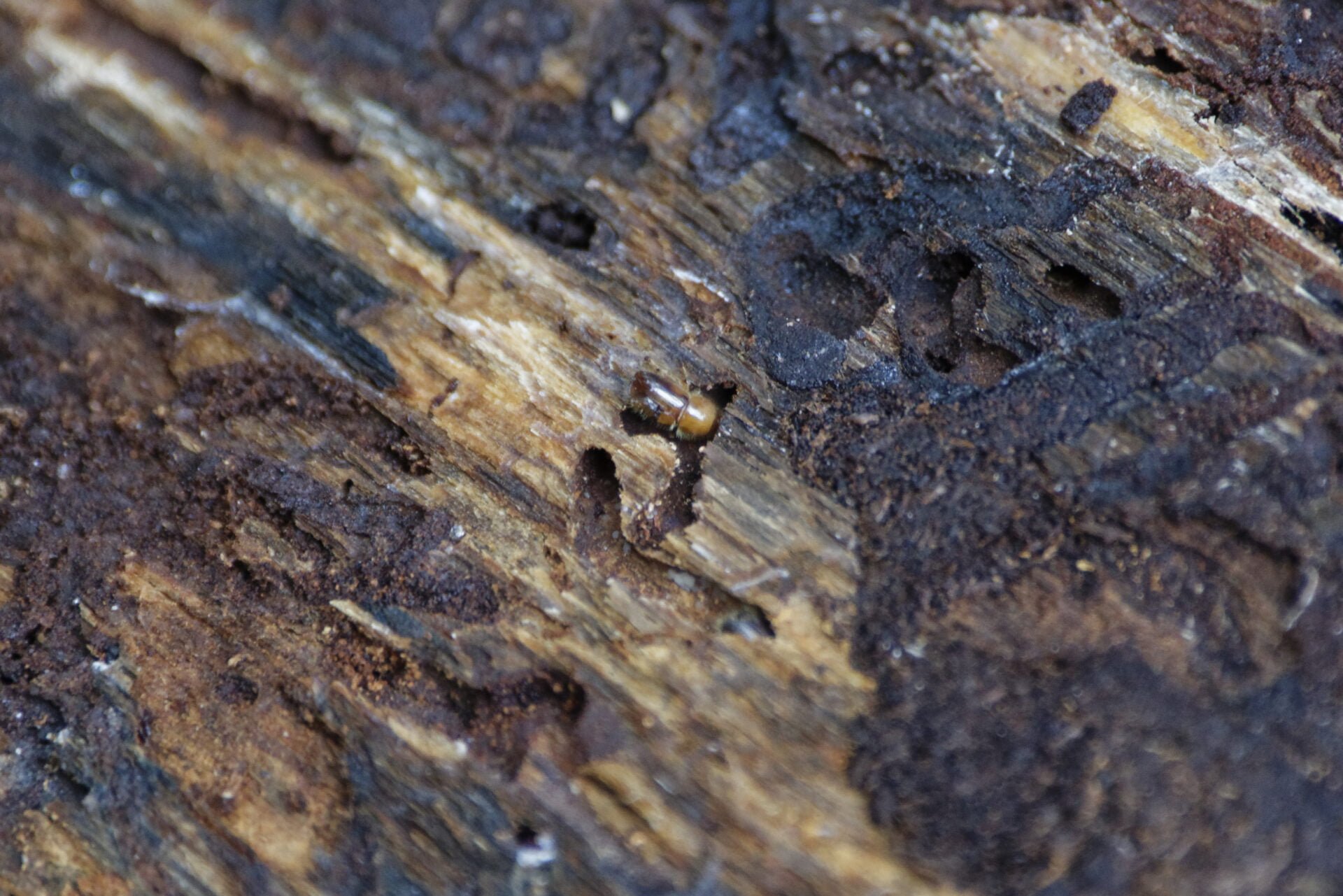 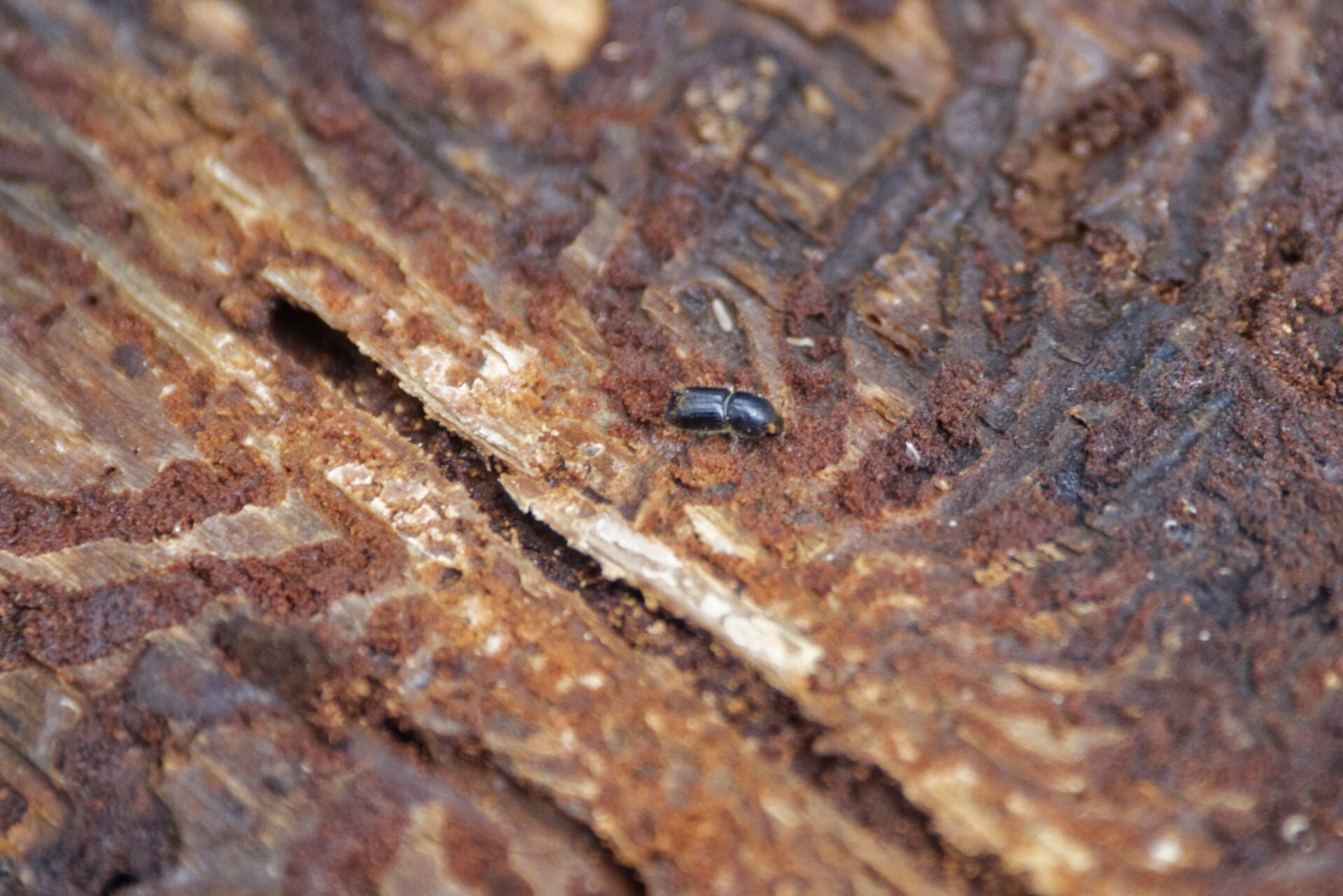 On the edge of the national park, infestations lead to conflicts of interest with forest owners whose spruce forests could be infested. Since the 1970s, forest scientists have been warning about the possible negative effects of spruce monocultures in regions unsuitable for spruce. This can already be increasingly observed in recent years and has massive implications for forestry. The results of the Boku Vienna risk analysis from the 2000s are confirmed and are a consequence of inappropriate forestry. Infested areas must then be quickly cut down and the barks stripped of the trees in order to let the broods die. 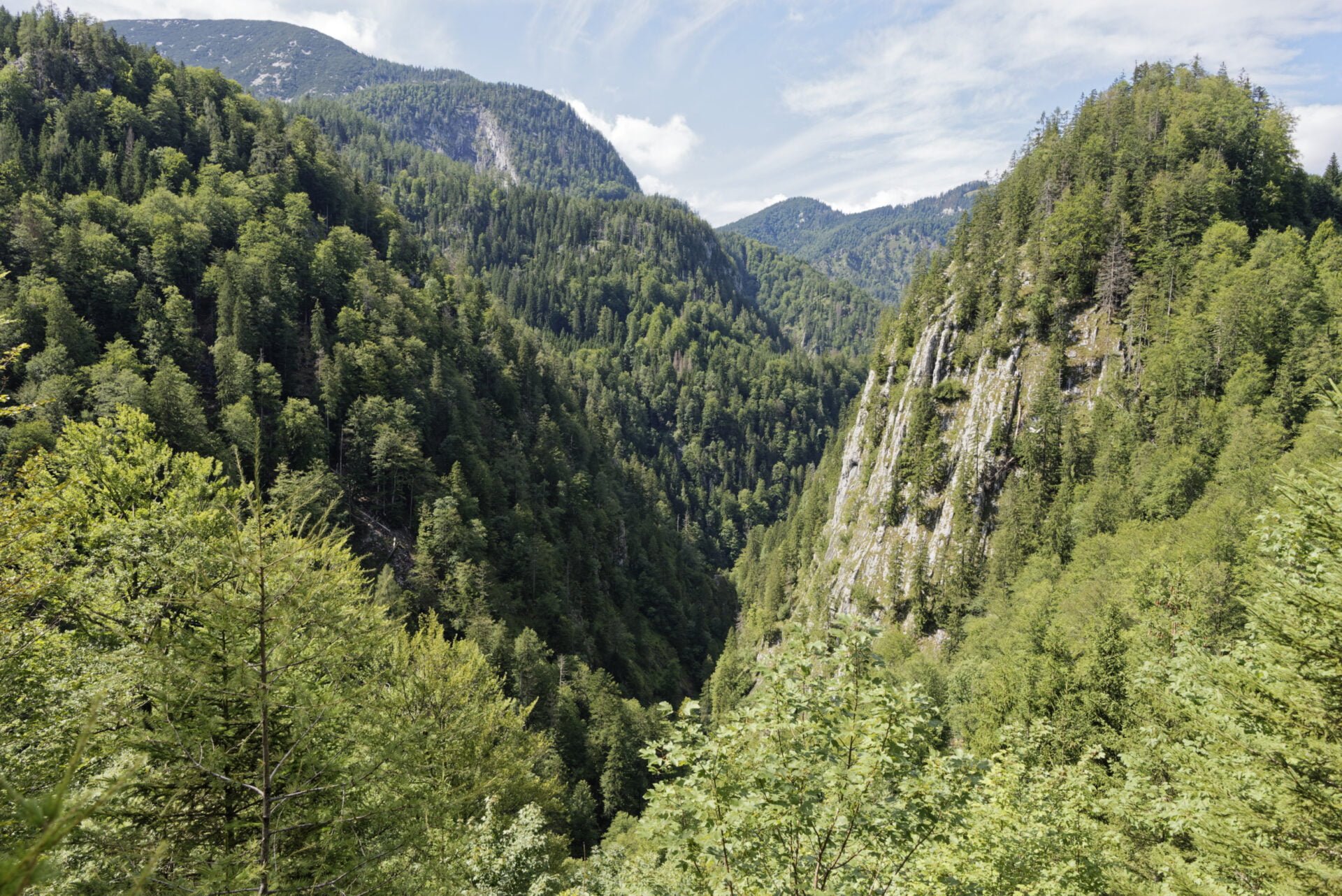 Hermann took us to his favourite remote places and the camera team Julie Ladina and Markus Lerchbaum were able to gather great footage and interviews to bring one of the most important issues of the Climate Walk to a wider audience.

“The results of the Boku Vienna risk analysis from the 2000s reveal the consequences of inappropriate forest management.” 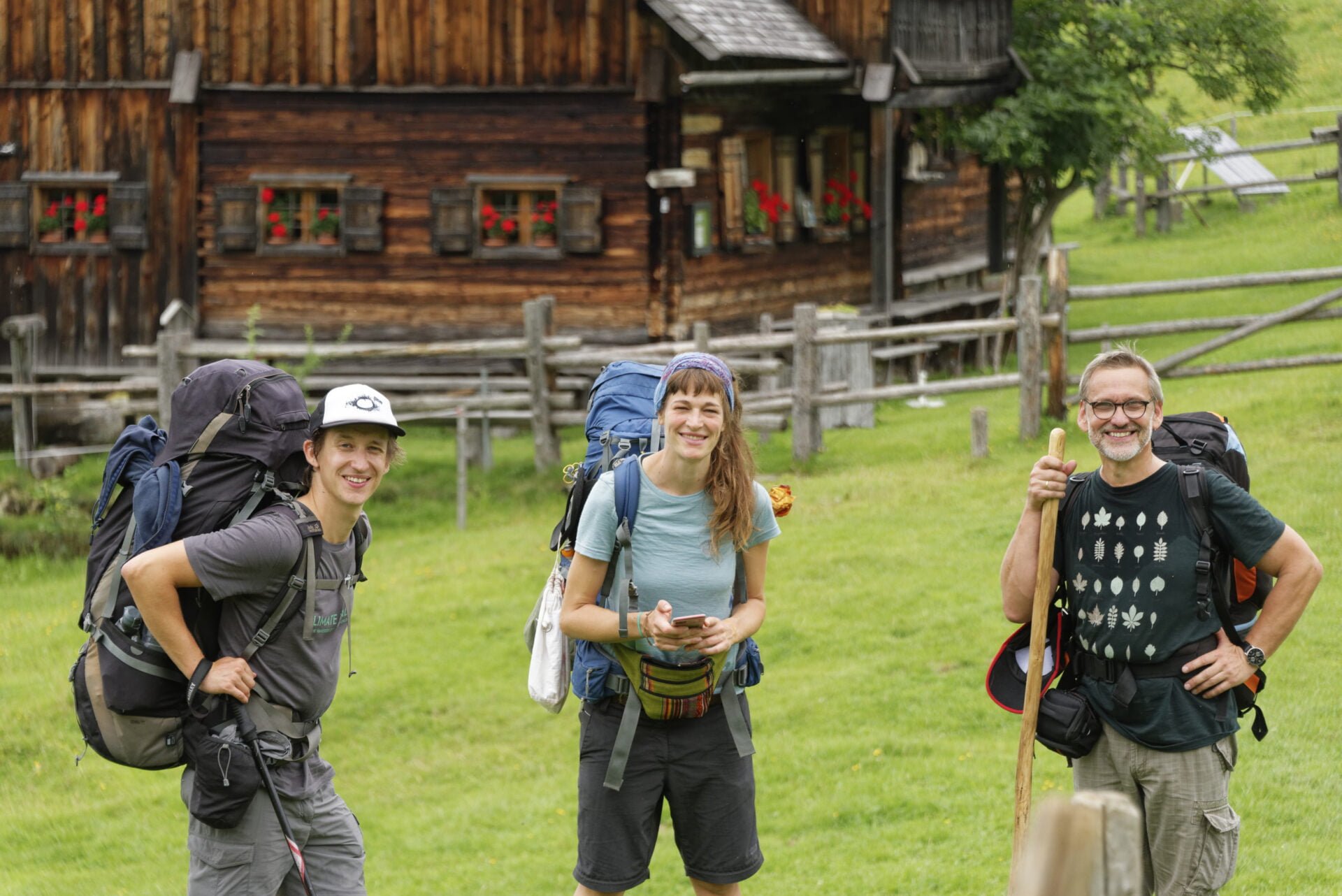 The Climate Walkers continue to walk …

For more details about the Climate Walk click here.

By purchasing the book FROZEN LATITUDES, written together with the APRI director, you can support the scientific project. 50% will be donated to the Climate Walkers.

Close Menu
This site uses Statcounter to analyze and understand visitor navigation paths. We take user privacy serious and don’t attempt to identify an individual person. Only anonymized data are retrieved with focus on what visitors to this website do, not who that visitor is. We do not store and/or process personal data of any kind and thus fully comply with the GDPR.OKRefusePrivacy Policy